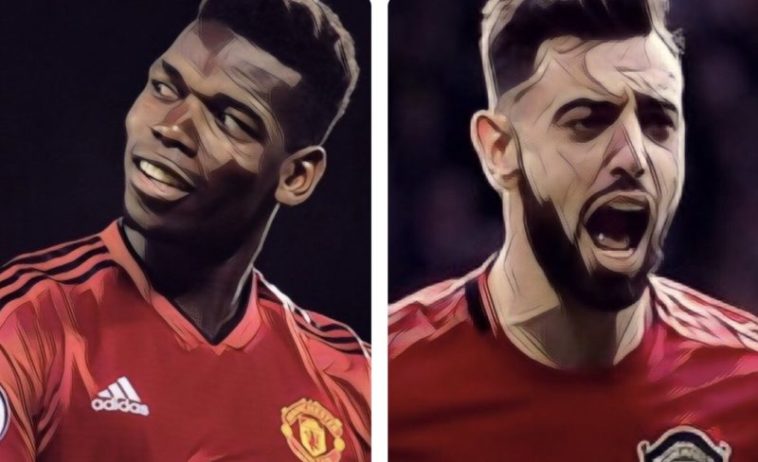 Bryan Robson has discussed how Ole Gunnar Solskjaer could potentially utilise Paul Pogba and Bruno Fernandes together in the Manchester United midfield.

Fernandes has starred since his mid-season arrival from Sporting Lisbon, scoring three goals and providing a further four assists in all competitions to quickly establish himself as a key figure in Solskjaer’s side.

The Portuguese international is yet to play alongside Pogba due to the Frenchman’s long-standing injury problems this season, though former captain Robson is excited at the prospect of the duo playing alongside each other after being impressed by Fernandes’ impact.

“They are both special talents,” Robson said, as per The Times. “He’s scored goals, entertained everyone and took pressure off the defence.”

The initial signs are promising ahead of a potential midfield partnership with reports saying the two players have been ‘getting along well this week’ having returned to first-team training, Manchester United stepping up their preparations ahead of the Premier League’s return later this month.

Fitting the attacking talents in the same side may prove problematic, however, with one of the duo likely to have to curb their attacking instincts in order to maintain balance in the Red Devils’ side.

Since the start of last season, Paul Pogba and Bruno Fernandes have been directly involved in a combined 77 league goals (43⚽️ & 34🅰️).

Solskjaer has largely favoured a 4-2-3-1 formation with Fernandes in the number ten role, though the option remains to switch to a 4-3-3, with Pogba having thrived on the left-hand side of that system during his four-year spell with Juventus.

Robson is confident the pair can prove successful together at the heart of the side, and is looking forward to the return of Pogba following a long lay-off through injury.

“We all know that Paul is a great talent. What he’s got to do now is to fit into whatever role that Ole wants him to play, whether that’s further forwards, with Fernandes dropping back, or the other way around,” Robson added.

“It’s like when people used to say [Steven] Gerrard and [Frank] Lampard couldn’t play together because they were similar but I think they could have done. Lampard was always going to be an attacking player, and Gerrard had it in his locker to defend and read the game well. He could play that sitting role, and Paul has got the ability to do it too, but what he has got to do is to take on more responsibility on the defensive side of the game if Ole is going to ask him to play that role.”

Pogba’s long term future has also been a constant source of speculation in recent months, the midfielder reportedly attracting interest from both Real Madrid and former side Juventus.

According to the Times, however, the ‘feeling within the club’ is that Pogba’s agent, Mino Raiola, ‘is the only man who wants a transfer’ with United ‘yet to receive an offer’ for the 27-year-old.

Scholes explains why Patrick Vieira was ‘so awkward’ to play against