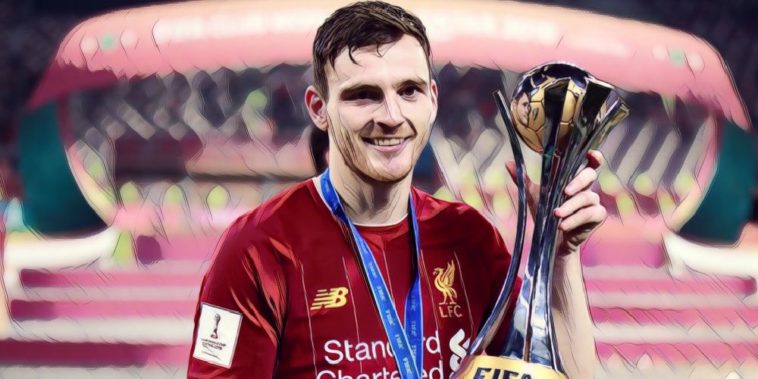 Andy Robertson has challenged Liverpool to win more honours in the new year after completing a ‘special’ 2019 by securing the Club World Cup this weekend.

Liverpool were crowned world champions after beating Brazilian side Flamengo on Saturday evening, Roberto Firmino’s extra-time goal securing a 1-0 victory over the Copa Libertadores winners and seeing the Reds win the inter-continental tournament at the fourth time of asking.

Robertson has now called on his side to continue their pursuit for silverware in the new year, the club currently leading the Premier League by ten points and through to the knock-out stages of the Champions League where they will face Atletico Madrid in the last-16 as they bid to defend their title.

The Scotland international says their Club World Cup victory can help continue their recent momentum, and hopes his side have changed the perceptions towards of the tournament after becoming just the second English side to secure the trophy.

“I don’t think the perception in South America needs to change. If they had won, there was going to be parties on the streets. In England, I suppose everyone has just moved on with their lives,” Robertson said, as per The Mirror.

“I think it is because not many English teams have been here. Down in England, everyone tends to focus on the Carabao Cup because everyone can win it.

“Manchester United were the only winners beforehand, so hopefully we have changed perceptions – and hopefully other English teams will be here in the future as that will mean we are successful in the Champions League.

“Leading up to the first Champions League final in 2018 where we got beat, we said to ourselves that we may not be here again, play with no regrets.

“We did that and fell short, but the following season we were back. We didn’t expect that.

“To get here, you need to win Champions League and we know just how hard that is from the last two years. We needed to take it like we’ll never be back and now we’re world champions for 2019.

“Look, that’s three for 2019. In the calendar year, we have won the Champions League, Super Cup and now this. To win three in any calendar year is special – and these are big ones.

“The Champions League is absolutely massive. The Super Cup and the Club World Cup are massive to us. We are really excited about it but we have got to take the momentum into 2020.

“Hopefully there are a couple more of these scenes of us lifting trophies above our head to come.”