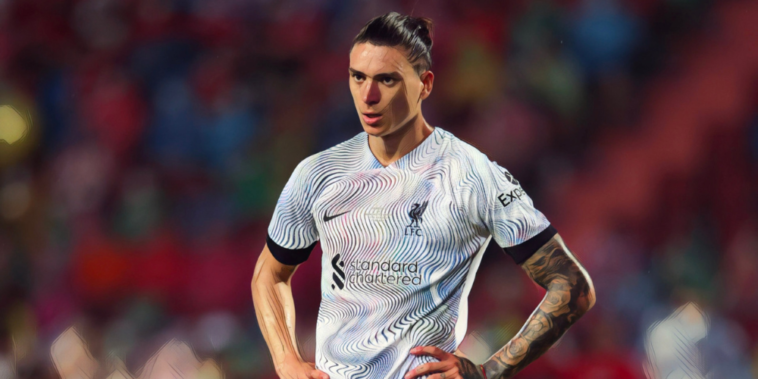 Andy Robertson has called for patience with Darwin Nunez as the summer signing settles in at Liverpool.

Nunez made his first appearance for the Reds in the 4-0 friendly defeat to Manchester United in Bangkok this week, having signed from Benfica in a deal worth an initial £64m.

The 22-year-old has arrived with high expectations after a prolific season in Portugal, with the forward having scored 34 goals in all competitions for Benfica last season – including twice against Liverpool in the clubs’ Champions League quarter-final clash.

Speaking at a pre-match press conference ahead of Liverpool’s friendly with Crystal Palace in Singapore, Robertson has given his verdict on the new arrival.

The Scotland captain called Nunez a ‘fantastic player’, but has urged for patience as the Uruguayan adapts to the demands of English football.

“He’s tall! But, look, he has obviously come in, we haven’t been back for too long, but we have to let him settle in. He’s looked good in training, and the Brazilian boys and everyone that speaks his language have helped him a lot. I don’t think me and him have had many conversations yet, we’ve just kind of smiled at each other, but that will come.

“A fantastic player, we played against him and he made it really difficult for us defenders in the two games and if he puts in those performances then he’ll be a really good player for us.”

Robertson also spoke on the Reds’ ambitions for the coming campaign and says the objective is to win more major trophies after a domestic cup double in 2021/22.

“We want the feeling of lifting trophies. We had it twice last season and two really good days out at Wembley and we want that feeling again. We know it takes a lot of hard work, we know it takes a lot of determination and everyone singing off the same hymn sheet effectively. If we do that, then we believe we are there or thereabouts because we’ve got a fantastic team when we’re at our best.”