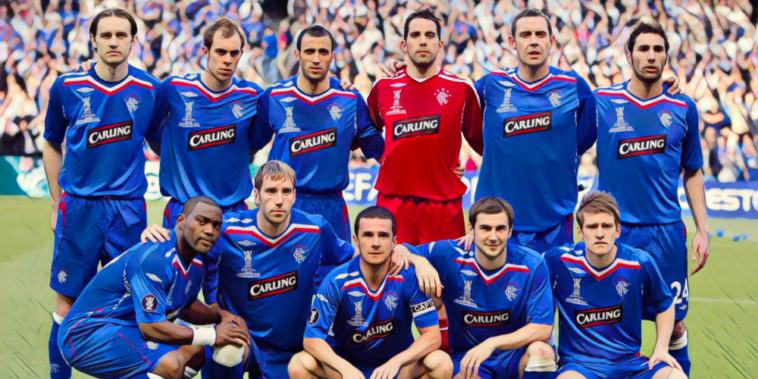 Rangers will take on Eintracht Frankfurt in the Europa League final on Wednesday, as the Scottish side prepare for their first European final in 14 years.

Giovanni van Bronckhorst’s side have enjoyed a remarkable run in continental competition this season, upsetting the odds to eliminate the likes of Borussia Dortmund and RB Leipzig to reach the final in Seville.

It’s a remarkable achievement given the financial disparity between Scotland and Europe’s major leagues and Rangers are now 90 minutes from a major European trophy and place in next season’s Champions League.

The Gers will hope for a better result than their last UEFA Cup/Europa League final appearance, when Walter Smith’s side were beaten 2-0 by an Andrey Arshavin inspired Zenit St Petersburg in Manchester.

Ahead of their Europa League showdown with Frankfurt, we remember the Rangers XI from their 2008 UEFA Cup final.

Alexander signed for Rangers on a free transfer in January 2008, after spells in England with Cardiff and Ipswich.

Signed as as understudy for Allan McGregor, he replaced the injured goalkeeper for the season’s run-in and was the hero of the semi-final win over Fiorentina, keeping clean sheets in both legs as Rangers progressed to the final on penalties.

The three-cap Scotland international was a largely assured presence in the final despite defeat and made 94 appearances for the club across his five-and-a-half year spell at Ibrox.

Broadfoot was in his debut season with Rangers after signing from St Mirren and endured a tough time against Zenit, with the right-back fortunate to escape with a handball inside the area before half-time.

Broadfoot was exposed on occasion by the impressive Arshavin and Radek Šírl, as Rangers hopes of European success ended with a 2-0 defeat at the Etihad.

He made won three league titles during a Rangers career that included 121 appearances, before spells in England with Blackpool and Rotherham.

Weir reunited with former Everton manage Walter Smith at Rangers after signing a short-term deal in January 2007, one that would be extended for five seasons as the veteran defied time to have an impressive career with the club.

The UEFA Cup final came four days after the centre-back’s 38th birthday and he was a solid presence in the backline, winning his duels aerially and marshalling the back four of Smith’s side.

Weir won three league titles at Rangers, captaining the side to the 2010/11 title at the age of 41 and became the first player inducted into the club’s Hall of Fame whilst still under contract at Ibrox.

Carlos Cueller spent just one season with Rangers, but it proved a memorable campaign for the centre-back after his arrival from Osasuna.

He won the Scottish Cup and Scottish League Cup during his sole season in Scotland, before making a £7.8m move to Aston Villa.

Cueller made 121 appearances across his time at Villa Park before short spells at Sunderland and Norwich.

Sasa Papac cemented his position in the Rangers team during the 2007/08 campaign, as the club reached three major cup finals.

Papac had signed for Rangers as a centre-back before moving to left-back and was arguably the Scottish side’s best performer in the defeat to Zenit, showing tenacity in the challenge and limiting the threat of Aleksandr Anyukov’s forward runs.

The Bosnian also made a vital intervention as he headed Andrey Arshavin’s goal-bound effort off the line after the forward had rounded Alexander.

Hemdani was featuring in his second UEFA Cup final having also been on the losing side during Marseille’s defeat to Valencia in 2004.

The Algerian struggled to contain the Zenit midfield during the final loss in Manchester, in what proved to be the final appearance of his Rangers career.

Hemdani was frozen out of the side the following season and departed in 2009 having made 108 appearances for the club.

Ferguson was viewed as Rangers’ key performer but was well marshalled during the final defeat to Zenit, a fixture which represented the midfielder’s 400th appearance for the Scottish side across two spells.

The 2008 final was the only major showpiece Ferguson lost as a Rangers player and the midfielder’s second spell with the club came to an end with a move to Birmingham City in 2009.

He won the English League Cup under the guidance of ex-Rangers boss Alex McCleish in 2010/11.

Thomson signed for Rangers in a £2m deal from Hibernian and made 44 appearances during the 2007/08 campaign, his first full season at Ibrox.

The midfielder was named in the starting XI for the UEFA Cup final and whilst his work was tireless he struggled to influence the game as hoped.

Another signing from Hibernian, the versatile defender was stationed in an unfamiliar role on the flank as Rangers fell to defeat in Manchester.

He scored five goals during his debut campaign including a crucial quarter-final effort against Sporting Lisbon during Rangers’ run to the UEFA Cup final, but like most of his teammates was unable to make a difference in the showpiece.

Whittaker made 209 appearances for Rangers before signing for Premier League side Norwich in 2012.

Steven Davis could become only the fifth footballer – after John Greig, Sandy Jardine, Dave Smith and Willie Johnston – to feature in two European finals for Rangers this week, with the veteran midfielder having been a part of their 2008 UEFA Cup final side.

Davis signed for Rangers on a six-month loan deal in January 2008 and started the final defeat to Zenit, before joining on a permanent deal from Fulham that summer for a fee of £3m.

The Northern Ireland international won three league titles and was named as the PFA Scotland Players’ Player of the Year in 2009/10, before returning to the Premier League for a successful spell at Southampton.

He returned to Rangers in 2019 and at 37 remains an important part of the current squad, with the midfielder winning the SFWA Footballer of the Year award for his role in Ranger’s 2020/21 drought-breaking title triumph.

Jean-Claude Darcheville found himself isolated as the lone forward against Zenit, though had Rangers’ best chance as his low effort was saved by Vyacheslav Malafeev.

Darcheville often brought a commendable work-rate but struggled to find the net with regularity, including a woeful miss against Lyon as Rangers crashed out of the 2007/08 Champions League group stages before their UEFA Cup run.

The forward departed Rangers six months after the final loss, returning to France to sign for Valenciennes.

Nacho Novo was a popular figure across six seasons with Rangers and was introduced with 13 minutes remaining against Zenit in a bid to rescue the final.

The Spanish striker had missed both the League Cup and Scottish Cup finals through suspension, before being left out of the starting side at the Etihad.

Who's your team's shootout hero? 🎯

He had scored the winning penalty in the semi final shoot-out against Fiorentina to put Rangers through to the final and netted 16 goals in all competitions in 2007/08 – the best return of his Rangers career.

Rangers’ leading scorer was named only as a substitute for the UEFA Cup final and was unable to impact the game after replacing Steven Whittaker with just four minutes remaining.

Boyd scored 128 goals in 191 game during his first spell at Ibrox, including 25 in all competitions during the 2007/08 campaign.

He returned for a short second spell in 2014/15 as Rangers rebuilt from financial implosion and is the top goalscorer in the history of the Scottish Premier League with 167 goals.

Rangers signed McCulloch from Wigan ahead of the 2007/08 season and he was thrown on to add more physical presence in attacking areas during the closing stages of the final.

McCullock scored seven goals during a debut season that included a Scottish cup double and remained with Rangers despite the club’s drop into the lower leagues, helping the club to successive promotions.

He scored 70 goals in 303 appearances before departing to sign for Kilmarnock in 2015.

Read Also – Player Analysis: Why Barcelona are so keen on Leeds winger Raphinha