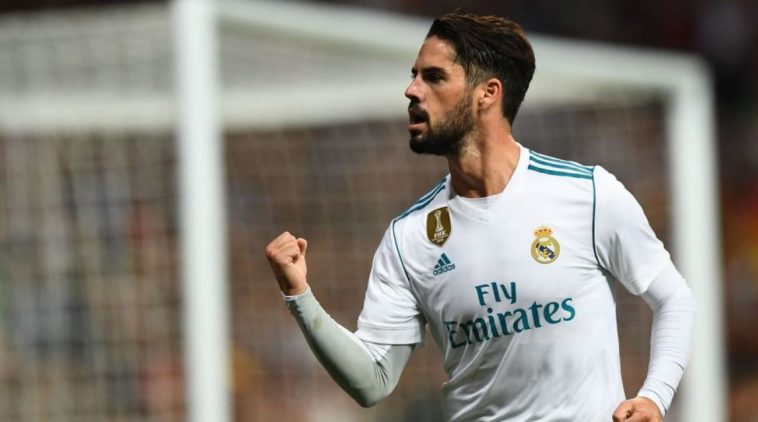 A brace from Isco guided Real Madrid to their first home win this season in the La Liga.

Real came into the game with a few key players out. Carvajal and Marcelo didn’t play, Benzema was injured, and so was Gareth Bale, who has been great so far.

18 year-old Achraf Hakimi made his full debut in the senior team, and contributed very well to the squad. Cristiano Ronaldo went another game without scoring, while Isco went back to his usual, creative self.

Espanyol were sitting in the lower half of the table coming into the match, and a mediocre display did not change that. Pau Lopez, who was at Tottenham last year, was the Catalan side’s best player, pulling off a few good saves.

There was another ‘match’ taking place, not related to football. The Madrid fans were seen waving the Spanish flag, while the Catalonian Espanyol supporters were singing and waving their own flag. Despite the turmoil, there were no clashes in the stands, which produced a great sight. Two sets of people, both with differing opinions and clubs, peacefully going about their way, not interfering with each other.

Back to football, Real could’ve gone ahead after just 23 seconds when a Sergio Ramos long ball fell to Isco, forcing a decent save from Pau Lopez. Los Blancos continued to dominate after the early chance, repeatedly threatening the Espanyol defence.

Isco put Real ahead right before the half-hour mark, toe-poking the ball into the net from a Ronaldo pass. Ronaldo himself had the chance to score soon after on the volley, but the ball went over.

Gerard Moreno came close to getting the equaliser, as he latched onto a shot after a mistake from Casemiro, but couldn’t find the net.

Madrid continued their dominance in the second half, but Espanyol also looked sharper and stronger. Sergi Darder had a shot blocked and Jurado’s effort forced a save from Keylor Navas early in the half.

Sergio Ramos made an error which put the ball on the plate for Moreno, but Nacho dove in to make a vital interception.

Real capitalised on the missed chance just moments later, as Ronaldo picked up the ball in the midfield, and passed it to Asensio. The youngster cut back in to the box and gave the ball to Isco, who scored with a good finish.