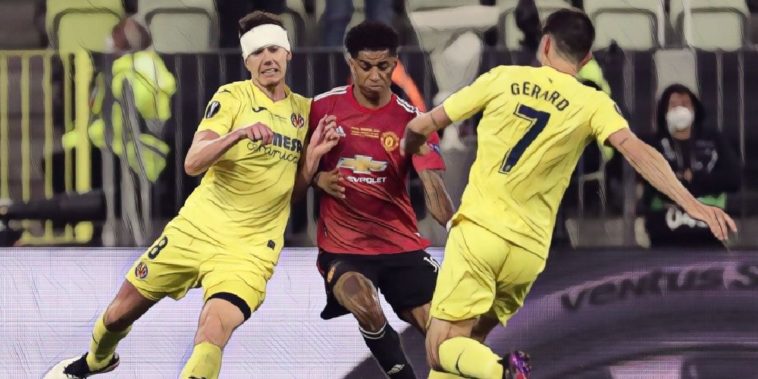 Marcus Rashford embarked on a passionate rant after Manchester United were on the wrong end of an 11-10 penalty shootout defeat to Villarreal in Poland, the Red Devils ending yet another season without silverware.

It was early domination from the off from Manchester United, with their Spanish opponents seemingly content to sit back and frustrate the pre-match favourites.

Having soaked up the early pressure, Unai Emery’s side would take the lead just before the half-hour mark, Gerard Moreno making the most of some slack Manchester United defending from a free-kick, the Spain international bursting beyond the marking of Victor Lindelof to poke the ball home for his 30th strike of the season.

For all of their possession, United lacked creative spark, as the Premier League runners up found it hard to find spaces against the well-drilled opponents.

However, United have made a habit of coming from behind this season, particularly in the second half of matches, and 10 minutes into the second half the Red Devils would draw level from what is becoming an increasingly familiar source. A corner from the left was cleared by Villarreal, but only to Marcus Rashford on the edge of the box. His strike was blocked, though the ball ultimately dropped kindly for veteran striker, Edinson Cavani, who stroked home in what was his first-ever appearance in a European final.

After the equaliser, it was all United, though they still really didn’t test goalkeeper Geronimo Rulli all too frequently, with the game heading into an additional 30 minutes of extra time.

Unai Emery had made all five permitted changes in regular time, while Ole Gunnar Solskjaer didn’t make his first change until the 100th minute, and Villarreal noticeably looked fresher although in the added period, although neither side were able to make a breakthrough in what was a final that will not live long in the memory.

While the game wasn’t up to much, the penalty shoot-out certainly provided some entertainment, with both sides matching each other penalty for penalty. With the scores 10-10, it was the turn of the goalkeepers to take a spot-kick against each other. Rulli despatched his before proving to be the hero, keeping out David de Gea’s tame effort to hand Unai Emery a record-extending fourth Europa League title.

The defeat means Manchester United are without silverware since they last won this competition back in 2017, and speaking afterwards, Marcus Rashford said he and his teammates must have a greater desire going into next season.

They also lost to Real Madrid in the Super Cup in 2017. 🇪🇸 pic.twitter.com/6I6r5M8qIf

“Disappointed,” he told BT Sport. “The feeling inside is difficult to explain. We came here to win. We’ve been working so hard all season and this was the opportunity to win a trophy and it didn’t happen for whatever reason.

“We have to get rid of the disappointment and look back at the game and see what we did wrong.

“The team will not give up – no chance. The manager won’t allow us to give up.

“We will come next season with bigger desire.”

The England international then embarked on a passionate rant, insisting that his side’s runners-up finish in both the Premier League and Europa League count for absolutely nothing, while promising supporters that his side have shown plenty of ‘sacrifice’ in their pursuit of returning the club to the glory days.

“People say a lot about Man Utd going downhill, blah, blah, blah, blah but for me, the club, desire, hunger, talent, ability, the squad, we have everything to compete at the highest level. We just have to show it to the world and ourselves, show why we belong in the top places and why we need to win finals like this,” he began.

“I’m 100% sure [we can compete because of] sacrifice. To win big trophies you have to show sacrifice. I could walk you into the dressing room and show you five, six, seven players – and me – who have had injuries from the start of the season. We all stayed and fought to be successful for the club.

“We have to go away and clear our heads. When we come back we start fresh.

“When Ole came in we had a process. We believe in the process. Part of the process is ups and downs. Just because we lose today I promise the fans no chance we give up.

“We will come back next season with more desire and hunger. We have to give 110%.

“I know in every club they don’t have this sacrifice. In the top clubs they do. That’s why they win trophies.

Asked about whether he’d be fit for the Euros after picking up a foot injury in the game, he said: “Forget about the foot for now. The disappointment of today, I don’t feel the foot.”