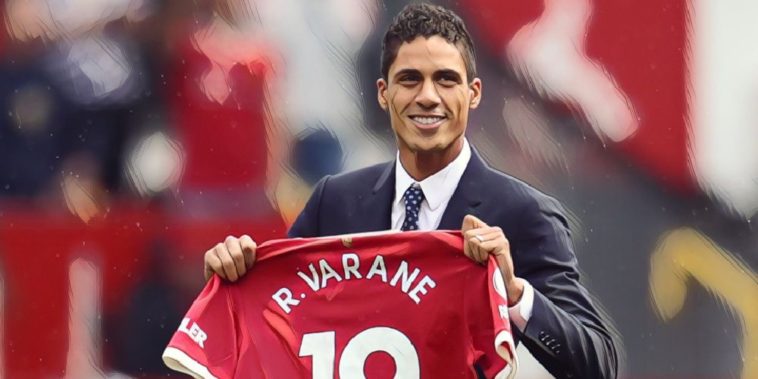 It’s safe to say that Manchester United fans in attendance at Old Trafford on Saturday had a pretty memorable day, not only did they see their side hammer rivals Leeds 5-1, but also saw the club officially welcome their latest addition as they rolled back the years with an on-pitch presentation.

Varane’s move to Manchester United has been no secret, a deal having been agreed almost two weeks ago, though visa issues and quarantine saw him miss out on the Premier League’s opening weekend.

However, 15 minutes before kick-off, the club formally introduced their new signing to the pitch to the delight of the Old Trafford faithful.

Varane’s move to club is one that has been 10 years in the making, with Sir Alex Ferguson attempting to sign the player back in 2011, only for the Frenchman to opt for a move Real Madrid following discussions with Zinedine Zidane.

Speaking to the club’s official website, the 28-year-old was asked about the timeline of his move to English football.

“There had been a lot of rumours and a lot of people speaking about me and Manchester United since 2011, when Sir Alex Ferguson came to my mother’s house,” he said. “When it was real, that was when I spoke with my club, and I felt it was a real opportunity to play in the Premier League for Manchester United.”

When it comes to medals, Varane has won the lot, including the World Cup, four Champions Leagues and three La Liga’s, and he is looking forward to taking on ‘a new challenge’ in the Premier League.

“I think it was a good moment because of a lot of things, but I think the most important one is it’s a new challenge and it’s a big motivation to start in a new league in a big club like Manchester United.

Now THAT is an Old Trafford welcome 🤩#MUFC @RaphaelVarane

“This opportunity was amazing for me, so I chose this change for me and my family. They have come with me. You feel when things are a good moment and this was the right moment.”

Varane revealed that he spoke with Ole Gunnar Solskjaer to gauge his ambitions and philosophy, saying he felt the Norwegian’s determination to steer the club back to winning silverware.

Asked about the reception he received on Saturday lunchtime, he admitted the reaction was bigger than expected.

“Yes, I came here because I wanted new emotions and it was exactly what I expected and bigger. It was massive, a great moment, and I want to say to the fans thank you, and I will do my best to leave everything on the pitch.”