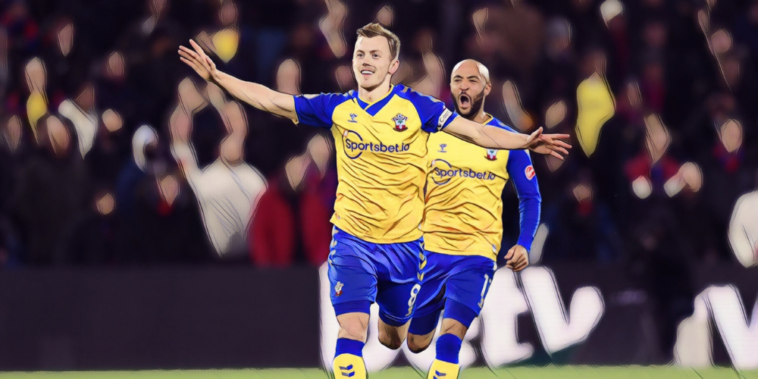 James Ward-Prowse added another fantastic free-kick to his ever-increasing collection of set-piece specials this week, curling home a stunning equaliser during Southampton’s 2-2 draw at Crystal Palace.

The midfielder’s ability from dead-ball situations has been a potent weapon for the Saints in recent campaigns, with the 27-year-old now joint-fourth amongst the most prolific free-kick scorers in Premier League history.

West Ham have developed a reputation as set-piece specialists under David Moyes, with the Hammers scoring more goals from dead-ball situations (16) than any other side in the Premier League last season.

Aaron Cresswell has shouldered the majority of the responsibility for free-kick and corner kick deliveries, with the left-back having provided eight assists as West Ham finished sixth to secure European qualification.

Cresswell’s threat has again been evident during the current campaign with four assists in all competitions, including three in just four Europa League appearances for the East Londoners.

The 32-year-old’s technique and West Ham’s wealth of set-piece targets have proven an invaluable combination for Moyes’ side, with his absence from the side in recent weeks having been felt.

Cresswell has also shown his goalscoring ability from free-kick situations in recent campaigns, netting memorable efforts against both Manchester City and Manchester United.

Liverpool lead the way for set-piece goals scored so far this season, netting nine in the Premier League in 2021/22 to date.

Trent Alexander-Arnold has shared set-piece duties with Andy Robertson in recent campaigns, with the Reds’ right-back having regularly demonstrated his quality from such situations.

Alexander-Arnold’s technique has already seen the 23-year-old register seven assists so far this season, with no player in the division having created more goals since the start of the 2018/19 season.

Every free-kick Trent Alexander-Arnold has scored in the Premier League so far ☄️👇 pic.twitter.com/NR2WtMK8oc

Alexander-Arnold netted his first goal of the campaign with a free-kick against West Ham last month, with the right-back named as the Premier League’s Player of the Month for November.

Kevin De Bruyne has failed to find his finest form during a testing opening to the 2021/22 season, but the brilliant Belgian remains amongst the Premier League’s very best.

Winner of the PFA Player of the Year Award in each of the past two campaigns, the Manchester City midfielder has starred with his phenomenal rate of assists for Pep Guardiola’s side.

De Bruyne’s technique and vision have seen him rack up huge numbers for goals created, whilst he is an excellent set-piece taker and often heads City’s queue for dead-ball situations ahead of names such as Riyad Mahrez and Ilkay Gundogan.

The 30-year-old has varied his technique for free-kicks, from using the popularised knuckleball to curled efforts of precision and even low attempts under a jumping wall.

James Maddison’s spectacular goals from free-kick situations first saw the midfielder rise to prominence, firing in a catalogue of fine efforts during spells with Aberdeen and Norwich.

Since moving to the Premier League he has continued to thrive from dead-ball opportunities, scoring six direct free-kick goals for Leicester across the past three seasons.

James Maddison with a free-kick from the edge of the area?

The 25-year-old’s ability to bend the ball over a wall has been a fine weapon for the Foxes, whilst he also takes the majority of the corners for Brendan Rodgers’ side.

James Ward-Prowse leads the way as the Premier League’s best set-piece taker at present, his brilliant equaliser against Crystal Palace just the latest in a long line of fine free-kicks.

The Southampton midfielder has now scored 11 free-kicks in the Premier League, moving level with the likes of Cristiano Ronaldo, Sebastien Larsson and Laurent Robert.

James Ward-Prowse is an absolute problem from set pieces 🔥

It's another picture perfect free-kick from the Southampton man 😍 pic.twitter.com/7vDPHArtvS

Just three players – David Beckham, Gianfranco Zola and Thierry Henry – have ever scored more and Beckham’s record of 18 is within reach for a player who has almost perfected his craft.

Given the choice of any Premier League player to take a free-kick from the edge of the area, there are few better options than Ward-Prowse who has now scored six free-kicks across the past two-and-a-half campaigns.