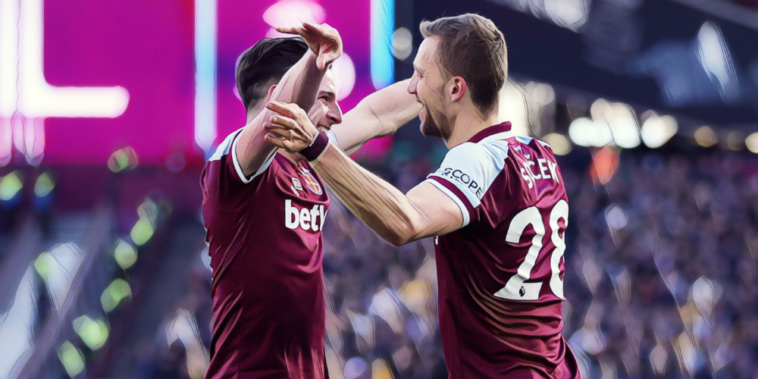 Tactical trends in the early part of the century saw midfield threes become common in the Premier League, as teams sought numerical advantage and dominance in the division’s engine rooms.

Recent seasons have seen midfield partnerships creep back into fashion, however, with double-pivots screening the defence now regularly seen whether sides are opting for a flat back four or three central defenders.

Teams who more often use three-man midfields have not been included.

Wolves have long boasted a strong Portuguese contingent with their midfield pairing of Ruben Neves and Joao Moutinho bringing a continental flavour to Molineux.

The duo have struck up a fine understanding which has helped Wolves’ push for European football, each bringing composure and quality to Bruno Lage’s midfield.

Moutinho remains a class act despite his advancing years, whilst Neves continues to be linked with an exit from Wolves as bigger clubs circle the Portugal international.

That Neves is still just 24-years-old can be difficult to believe given his experience, with the midfielder having no doubt benefitted from the mentoring his experienced compatriot has provided alongside him.

Mixing defensive tenacity with a poise in possession, the two will be crucial to Wolves’ hopes of gatecrashing the top six as the Premier League season reaches its conclusion.

Southampton are one of the form teams in the Premier League at present with just four sides having managed more points across their last 10 league fixtures, the midfield axis of Oriol Romeu and James Ward-Prowse having been behind their recent rise.

Romeu has been an understated member of the Saints side for several seasons and is enjoying arguably the best period of his career at present, with the Spaniard capable of acting simultaneously as both an enforcer and deep-lying conductor of the side.

Ward-Prowse has captured greater headlines this season given his penchant for the spectacular, the Southampton captain regarded as the best set-piece taker in the Premier League right now.

Pep Guardiola hailed the 27-year-old as such earlier in the season, though suggested Ward-Prowse’s overall game can be overlooked given his excellence from set-piece situations.

“There isn’t a better taker than Ward-Prowse. He’s so good at it that maybe you miss his quality as a player as well. He is a guy who adapts in midfield positions, a team player who has great quality with or without the ball.”

Ward-Prowse will hope his endless energy and quality in possession can earn him inclusion in Gareth Southgate’s plans ahead of Qatar 2022.

Leicester season’s has not gone as hoped in 2021/22, with a wealth of injury problems and inconsistent performances having seen the Foxes fail to build on successive fifth-place finishes.

Brendan Rodgers’ side are 12th in the Premier League at present and look unlikely to reach Europe, a situation that has increased fears the club’s top talent could be prised from the King Power Stadium at the end of the season.

Heading the list of potential targets for bigger clubs are Wilfred Ndidi and Youri Tielemans, two talents who have established themselves among the best outside the division’s ‘big six’ in recent seasons.

Ndidi is one of the Premier League’s most prolific ball-winners and has finished inside the division’s top four for tackles won in each of the past four campaigns, including topping the rankings in both the 2017/18 and 2018/19 seasons.

Tielemans has become a brilliant box-to-box presence for the Foxes but has been linked with an exit as he approaches the final year of his contract, a departure which would break up one of the most effective and balanced partnerships in the Premier League.

David Moyes has overseen an impressive rebuild of West Ham in recent seasons, turning the side from Premier League strugglers into contenders for Champions League qualification.

Moyes’ recruitment has been shrewd including the arrival of Tomas Soucek from Slavia Prague, the midfielder arriving as a relative unknown before starring at the London Stadium.

The Czech Republic international scored 10 league goals for the Hammers last season and whilst those figures have dropped in 2021/22, his indefatigable stamina and physical presence have made him a daunting opponent for Premier League midfielders.

Rice has continued to get better and better alongside Soucek, the stand-in captain for much of the season seemingly destined for European football’s biggest stage.

West Ham will hope that chance comes in his current colours, with the Premier League’s top sides interested in signing a midfielder who has taken his game to new levels this season, combining defensive work and intelligence with game-breaking runs forward.

There are midfield partnerships with better technical quality than the West Ham duo, but few who combine the all-action presence to overpower almost any opposition.

We’re ranked Mateo Kovacic and N’Golo Kante as our premier midfield partnership, the duo providing a brilliant balance at the base of the Chelsea midfield.

Kante’s is regarded as one of the best midfielders of his generation, his starring role in Chelsea’s Champions League success last season – including a man of the match final performance – adding another chapter to his unforgettable career.

The France international covers almost every blade of grass, snapping into challenges and breaking lines with dynamic runs forward.

Kovacic has developed into one of most complete midfielders in the league, possessing a press-resistant dribbling ability that allows him to flourish in congested spaces.

Kova really was all action on Sunday. ✊ pic.twitter.com/oNFu4GDX8i

Kovacic’s multi-faceted talents were subject of praise from West Ham’s Declan Rice last month, who hailed the Croatian as one of the Premier League’s best.

“He’s incredible. I think you don’t really realise how good he is until you play against him. Obviously, when you watch him, you appreciate the good footballer that he is,” Rice said to BT Sport.

“He can take the ball in tight areas, his dribbling ability is unbelievable, he can find a pass, control games, and is fairly quick as well.

“He’s always been a tough opponent to play against. Every time I played against him, even in the Euros, he’s done some stuff on the ball where I thought, ‘Wow, he’s a top player.'”