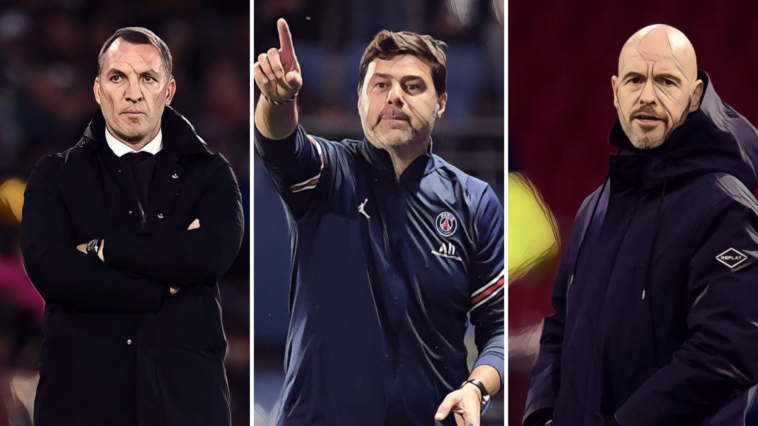 Manchester United are assessing candidates to become the club’s next permanent manager, having named Ralf Rangnick as interim boss until the end of the season.

The dismissal of Ole Gunnar Solskjaer has left the Red Devils seeking a new direction ahead of next season, with a whole host of leading coaches from across Europe having been linked with the vacant role.

Finding the right appointment will be crucial to a side who have struggled to return to former glories in recent campaigns and we’ve decided to look at how the bookmakers assess the candidates for the Manchester United position.

So for those of you who like to follow the latest odds on the bet365 mobile site, here are the favourites to be Manchester United’s permanent manager as the 2022/23 season begins.

Brendan Rodgers has been priced as 14/1 fourth favourite to be appointed at Old Trafford, with the Leicester manager having won admirers since his return to the Premier League with the Foxes.

Across the past two seasons the Northern Irishman has guided Leicester to successive top-five finishes, narrowly missing out on Champions League qualification in consecutive campaigns.

The 48-year-old has previous experience of working for clubs with huge expectations after spells with both Celtic and Liverpool, winning consecutive domestic trebles with the former and coming close to ending Liverpool’s wait for a league title during his tenure at Anfield.

The Foxes are currently in the Premier League’s bottom half and suffered a group stage exit from the Europa League in midweek.

Ajax chief executive Edwin van der Sar has ominously said that the club needs to be prepared for Ten Hag’s eventual exit, the Dutch coach having interested some of Europe’s elite clubs following a fine period in Amsterdam.

Ten Hag has won two league titles and reached the Champions League semi-finals across his four seasons in charge of the Eredivisie outfit, with a third title potentially denied as the 2019/20 season was cancelled in response to the coronavirus crisis with Ajax top of the division on goal difference.

Ten Hag’s tenure has seen the 51-year-old implement attacking football and place his faith in youth, overseeing the development of names such as Matthijs de Ligt, Frenkie de Jong and current Manchester United midfielder Donny van de Beek before selling each on for major fees.

Only two teams from outside Europe’s top five leagues have won every single game of a Champions League Group Stage campaign:

The Dutchman has also shown an ability to guide players to a new level, having seen the likes of Dusan Tadic and Sebastien Haller transform into Champions League stars after underwhelming spells in the Premier League.

Ten Hag’s side have impressed in Europe this season after qualifying for the Champions League’s last 16 with a flawless group stage record, but he could be open to a new challenge with greater resources at the end of the campaign.

His arrival would bring tactical flexibility – having switched fluidly between 4-3-3, 4-2-3-1 and 3-4-3 systems at Ajax – and implement a defined style of football that has been lacking at Old Trafford in recent campaigns.

Mauricio Pochettino has been a long-term target for the Manchester United board, with the Argentine having been linked with the position prior to Ole Gunnar Solskjaer’s appointment in December 2018.

Pochettino’s credentials come from an impressive six-season spell in the Premier League, spending one season with Southampton before turning Tottenham into Champions League regulars.

Silverware ultimately eluded Pochettino in north London, but his work in taking Spurs to four consecutive top-four finishes and the 2019 Champions League final have earned admirers.

Pochettino replaced Thomas Tuchel as manager of Paris Saint-Germain in January, but he has been continually linked with an exit from the Parc des Princes as he struggles with the demands of a superstar dressing room and absence from his family.

The 49-year-old’s family have remained in London despite his move to France and it is believed he would be open to returning to English football, despite his public insistence that he remains happy at PSG.

Pochettino’s experience in the Premier League and ability to implement an energetic attacking style have placed him amongst the frontrunners.

Ralf Rangnick is the favourite to still be in charge as next season begins, despite the German signing just a six-month deal to oversee the side until the end of the campaign.

Rangnick arrives as one of German football’s most respected figures and has vast experience in a wide-range of roles, with a strong end to the season perhaps enough to convince both the 63-year-old and the United board to extend his spell as first-team manager.

Ralf Rangnick on his future plan for Manchester United: “It's about recruitment but also making sure every year we have academy players good enough to make it into the first team. Remember: one doesn't exclude the other”. 🔴 #MUFC @utdreport pic.twitter.com/1lvI59lUcX

The interim boss is famed for his preference for pressing football, having been amongst the leading exponents of the gegenpressing system popularly used by the likes of Jurgen Klopp.

Having struggled to identify with the side during Solskjaer’s reign, a return to front-footed attacking football could see the Red Devils decide on a longer-term future with Rangnick at the helm.