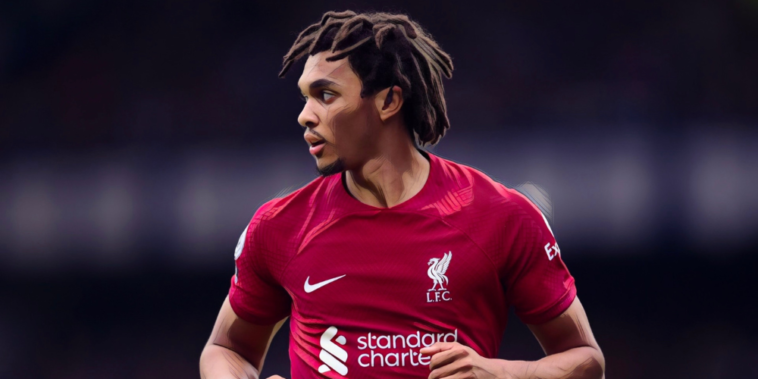 England’s lack of goals has been a talking point during the international break, with the Three Lions going over 550 minutes without a goal from open play before the 3-3 draw with Germany at Wembley.

It’s now six games without a win and creativity has been an issue for Gareth Southgate and his side. With the World Cup fast approaching, we’ve ranked the leading English players for chances created in the Premier League this season.

Kieran Trippier has been a fine signing for Newcastle since returning to the Premier League in January. The right-back spent two successful seasons with Atletico Madrid and won the La Liga title with the Spanish side before returning to English football earlier this year.

The 32-year-old has provided a constant source of ammunition for Newcastle’s forward line, boasting threat from both set-pieces and open play.

Gareth Southgate has a choice to make. 😅 pic.twitter.com/u2gxlmO3IX

Trippier leads the Premier League for crosses (66) this season, while no player has provided more passes into the opposition’s box. The defender was included in the latest squad for the Nations League clashes with Italy and Germany, but failed to get onto the pitch in either game.

Leicester fans have been puzzled by James Maddison’s continued omission from the England set-up, with the midfielder having been the shining light in a difficult period for the Foxes.

Maddison has been in consistent form for some time, though his improved end product around goal has failed to win him a recall into Gareth Southgate’s plans.

The 25-year-old has seven goals and four assists in his last 11 Premier League games dating back to last season, while only Harry Kane and Ivan Toney have been directly involved in more goals this calendar year.

James Maddison has been directly involved in 16 Premier League goals in 2022:

Harry Kane and Ivan Toney are the only English players with more. 🧐 pic.twitter.com/dBWZc1Aupd

Maddison has created 13 chances in the Premier League so far this season despite Leicester sitting bottom of the division without a win. Only four English players have managed more.

Trent Alexander-Arnold is another name facing a fight to make the World Cup in Qatar, with the Liverpool defender not making an appearance in the recent Nations League games.

Gareth Southgate has shown a lack of trust in the Reds’ right-back since his international debut and Alexander-Arnold has made just one international appearance for England in 2022.

Alexander-Arnold’s exclusion comes despite his continued chance creation at club level, where he has created 13 chances so far this season.

🔐 Most chances created from open play of England players since the start of last season:

😜 Not bad for a defender pic.twitter.com/bCWhwGdibD

Last season he ranked second in the Premier League for both big chances created (18) and assists (12), having reached double figures on the latter metric for the third time in four seasons. His haul of 12 saw him fall one short of his own divisional record for a defender, set in 2019/20.

Bukayo Saka has had an impressive start to the season at Arsenal, who sit top of the Premier League after winning six of their opening seven league fixtures.

Saka has created 14 chances in the Premier League so far this season and ranks behind only Manchester City’s Kevin De Bruyne for assists with four for the campaign to date.

England Men’s Player of the Year 🤩🏆
This is a such a special honour for me and I’m very grateful to everyone who voted.
God is Great ! pic.twitter.com/5T6kPCQPmp

He added an assist for England during the draw with Germany, having teed up Mason Mount with a surging run into the penalty area. After a somewhat failed experiment at left wing-back in Italy, he will hope to have earned a starting spot for Qatar in his favoured right-wing position.

Jack Harrison is the joint-leader for chances created among English players in the Premier League this season, having created 16 chances.

The winger has had a bright start to the campaign at Elland Road and has a goal and three assists from his six Premier League appearances.

Harrison – who was subject of interest from Newcastle during the summer – has impressed since Leeds’ promotion to the Premier League and has scored 16 league goals across the last two campaigns.

He was capped twice for the England u21 side in 2017, but has so far been overlooked for senior honours.

James Ward-Prowse has spent the past five years on the fringes of the England squad but has failed to earn a regular chance with the national side.

Last summer the midfielder was forced to pack his bags and leave St George’s Park, having been among the seven players cut from England’s provisional squad ahead of Euro 2020. The 27-year-old appears to be in real danger of missing another major tournament, having failed to feature during England’s recent Nations League games despite inclusion in the squad.

🗣️ “That spurred me on to make sure I’m not repeating that.”

James Ward-Prowse says missing out on the Euro 2020 squad hurt and he believes he’s doing enough now to avoid the same pain as he looks to make the England Squad for the 2022 FIFA World Cup. pic.twitter.com/R4gqbvE9ci

His lack of opportunities comes despite being a prolific creator for Southampton, for who he has carved out 16 chances already this season.

Harry Kane ranks alongside Ward-Prowse and Harrison as the leading chance creator among English players in the Premier League this season.

Kane’s game has evolved in recent seasons with the forward adding invention to the goalscoring instincts that have seen him win three Premier League Golden Boots and chase down all-time records for club and country.

He finished as the leading goalscorer and assist provider in the Premier League in 2020/21 and has six goals and an assist from seven league games so far this season.