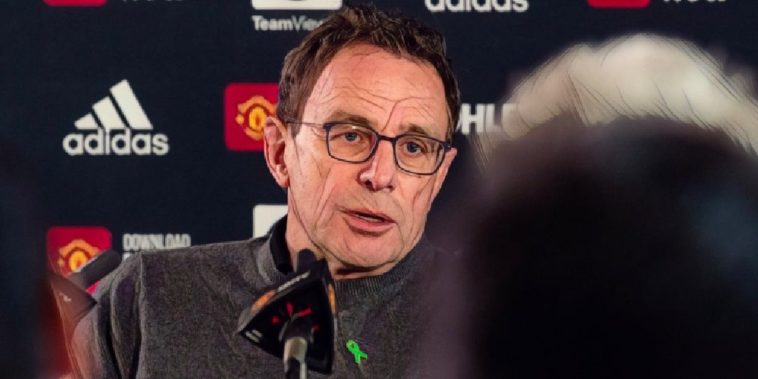 Ralf Rangnick has outlined what he wants to see from his side as Manchester United take the short trip across the city for the Manchester derby.

The two teams go into the game separated by 19 points, City sitting six points clear at the top of the Premier League, while United are fourth and looking over their shoulders in the race to qualify for the Champions League.

The Red Devils have only lost once in the Premier League since Rangnick’s appointment back in November, though have drawn three of their last five outings in the league.

Their recent stalemate against Watford saw United create a whole host of chances but inexplicably being unable to find the back of the net, a story that has been a bit of a theme in recent weeks, with Cristiano Ronaldo having scored just once in his last 10 appearances.

Ahead of the trip to the Etihad, Rangnick praised Man City as one of the best sides in the world, while saying that the game will take ‘a lot of tactical work’ and ‘fighting with and without the ball’.

“We know that we are playing one of, if not the best team in the world,” he told the media. “They have developed well since Pep arrived. The same happened at Bayern Munich and Barcelona. He is one of the best.

🗣 "They have a clear identity of how they want to play."

Ralf Rangnick on whether Manchester United are in a position to get in a position near to Man City or Liverpool pic.twitter.com/Kc2DoBCdB8

“We know what they are all about. It will be about a lot of tactical work, fighting with and without the ball.

“We have created a lot of chances in the last ten or 11 games. We scored four goals at Leeds and should have scored one, two or three goals against Watford. But I would have been more worried if we had not been creating chances. We are also compact when the other team is in possession of the ball.”

Manchester City almost always dominate possession, and Rangnick suggested that United’s opportunities will come in the ‘transitional moments’ of the game.

“In the end, it is about controlling the game, not letting them play without pressure, because this is what they want, overloading spaces,” he assessed.

“The goalkeeper almost plays as a centre-back and the full-back a No.6 midfielder.

“For us, it is about finding moments where we can take the ball away from them and make the best of those transitional moments. It is up to us on Sunday to show that we can do that.”