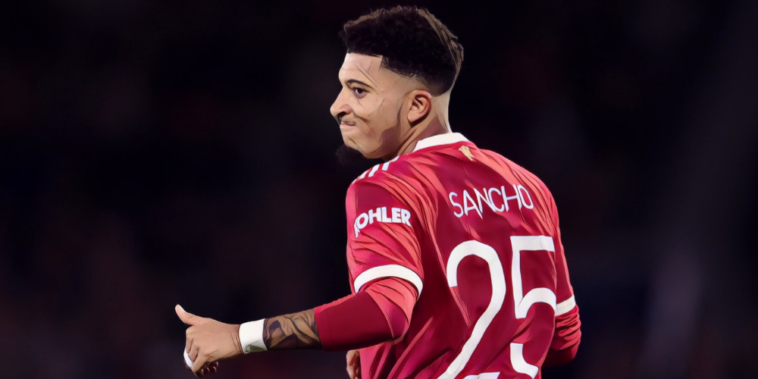 Ralf Rangnick has discussed Jadon Sancho’s struggles at Manchester United and believes the summer signing is still adapting to the demands of the Premier League.

Sancho signed for the Red Devils from Borussia Dortmund in a £72.9m deal last summer, but has struggled for form this season and has scored just one goal in 17 league appearances for the club.

The 21-year-old has also failed to provide a single assist in a disappointing debut campaign, having been one of Europe’s most productive wide players during four impressive seasons at Dortmund.

Sancho was named amongst the substitutes for last weekend’s draw with Aston Villa as Anthony Elanga earned a first start of the season ahead of the England international, and Rangnick has discussed the reasons behind Sancho’s struggles so far this season.

“Difficult to say,” Rangnick told his pre-match press conference ahead of United’s clash with Brentford. “I think it’s a different league, it’s a different competition. It’s more physical, it’s more pressure, although he also played for one of the biggest clubs in Germany, in Dortmund, but I think in total, the whole league, the whole competition is more physical and the level of expectation is higher.

“When he came to Borussia Dortmund as a young player, he was only 18. Now he’s 23, 24, playing for one of the biggest clubs in the world.

“I think it’s also got to do with a lot of different things up here in his head. But in training, whenever I see him train, he’s showing that he’s one of the best players in the training sessions. But now it’s about the transfer to when he’s playing, and to showing to the same kind of level and performance on the pitch.”

Rangnick suggested that Sancho is low on confidence at present and says creative players must find self-belief in order to perform, calling on the winger to transfer his training performances onto the pitch.

“In training, as I said, in most training sessions he’s training on a very high level. Now it’s about having the transfer onto the pitch in the league competitions. In the Premier League, in the FA Cup and in the Champions League.

“He can do that; he has the ability to do that. There is no doubt about that, but now we have to develop him into that kind of player, showing the same kind of performances that he showed at Borussia Dortmund.”

Sancho has featured in various roles across the forward line this season, having initially been signed with a view to ending the Red Devils’ problem position on the right wing.

Rangnick has suggested that the star prefers to operate from the left flank, however, granting him a licence to drift infield and find shooting opportunities.

“It’s clear that in a 4-3-3 that he’s a player for either of the two wing positions, either left or right. He can play both.

“I think he would prefer a little bit the left side, because he can then switch inside and have a go on goal or shoot on goal with his strong foot. But for me, there’s no question, no doubt about his position. He’s a winger.

“As we say in Germany, he’s somebody who can dribble fast with the ball, and for me it’s not at all a question of which is the best possible position for him.”