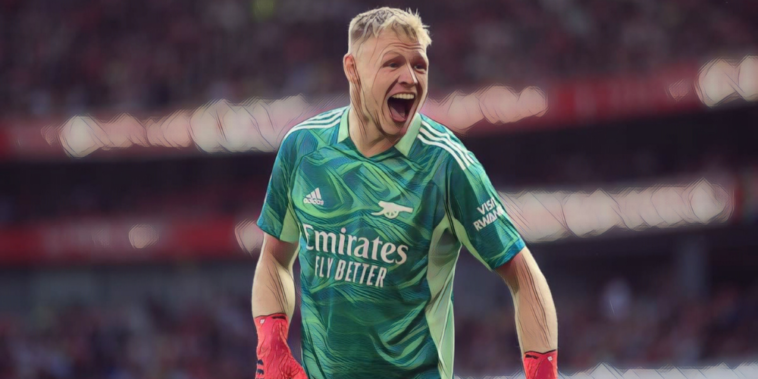 Aaron Ramsdale says he is thriving on the pressure at Arsenal and has revealed his ambition to become England’s number one.

Ramsdale signed for Arsenal from Sheffield United during the summer and has ousted Bernd Leno as the club’s number one in recent weeks, his performances having earned the 23-year-old inclusion in the England squad for this month’s World Cup qualifiers against Andorra and Hungary.

Ramsdale’s introduction to the Arsenal side has coincided with an upturn in form for the north Londoners, with Mikel Arteta’s side having conceded just once in their past four games.

The goalkeeper has discussed his adaptation to the dressing room at the Emirates and believes he can provide leadership to an Arsenal squad in transition.

“When I came in, I got told to be myself,” Ramsdale said, as per the Guardian. “My character is to be loud, be a leader and show passion. I also knew that I might have to shake things up in a positive way and my own way. I think it is well documented that they were missing leaders but I don’t think we’ve all turned into leaders all of a sudden. The team that is playing at the moment is just full of confidence and working well together. We’re all leaders in our own way.”

Ramsdale opened up on the weight of expectation at Arsenal as the club look to return to Europe this season, but is confident he can handle the pressure of being the Gunners’ number one goalkeeper.

“The bigger the pressure, the more I thrive,” he said

“You can sense it as soon as you walk through the doors that the club aren’t happy where they are. We want European football. It might have to be the Europa League and then the Champions League but we want to get back there. You understand the pressures that brings but it’s an enjoyable challenge.

“At the training ground, you see the history. The players that have played here with their unique numbers – as we have with England. You’ve got the Invincibles on the walls everywhere. It’s now our time to put some new history there.”

Ramsdale also spoke on the prospect of ousting Jordan Pickford at international level, with the shot-stopper – who travelled to Euro 2020 but is yet to earn a senior cap – called-up by Gareth Southgate this month despite the returns of Dean Henderson and Nick Pope to full fitness.

“I have the self-belief that, yes, I could hold down the position [of England No 1],” he said.