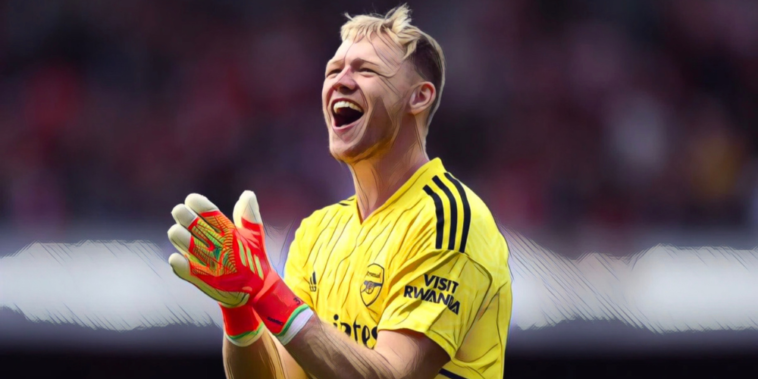 Aaron Ramsdale has opened up on Arsenal’s ‘burning’ desire to improve following last season’s disappointment at missing out on Champions League football.

Arsenal are top of the Premier League after a brilliant start to the new campaign, having won seven of their opening eight fixtures after a 3-1 win over Tottenham in the North London Derby on Saturday.

The Gunners have bounced back after agonisingly missing out on the top four in 2021/22, after a late-season slump – in which Mikel Arteta’s side lost five of their final ten games – saw Arsenal miss out on a place in the Champions League.

Ramsdale admits that disappointment, alongside arrivals including Gabriel Jesus and Oleksandr Zinchenko, have increased Arsenal’s desire for a successful season.

“The day I returned to pre-season — two weeks late through internationals — I came back and the standard of training had increased. People were demanding more of each other and training is a lot more competitive. There were always certain people who were upset when losing in training but now it is a collective. There is a good bit of banter after training when we go back into the changing room but it is great because the team spirit is really, really strong.”

Ramsdale opened up on Arsenal’s preparation for the win over Spurs and insists it was important that his side played the game and not the occasion. The goalkeeper also admitted that the side now have a ‘never-say-die attitude’ and maintain their belief, even if they concede a goal.

“We spoke about it before the game, to play the game and not the occasion and that’s what we did,” Ramsdale said.

“Any time something has happened this season — Fulham, Leicester, when we concede a goal — it is like we have scored a goal with the noise the fans are making and it gives us a boost. It is a never-say-die attitude, the way I would word it is a ‘F-it mentality’. Who cares we have conceded? We have got 10 minutes, 70 minutes, we will play our way. We never run out of time. That is the big thing for us and the manager — we don’t stop working.”

Arsenal lead the Premier League table after eight games, one point ahead of Manchester City. Ramsdale insists his team are not paying attention to the early table, but instead focusing on each game as it comes.

“You lot are thinking about that, we are just going into every game with a big smile on our face trying to win the game,” he said.

“When we win, we celebrate and if we don’t then we evaluate it and go again. We’re a young team and we are going into a game trying to enjoy ourselves and win. Then we’ll see where that takes us. This month before the World Cup we have three different competitions and we want to win in every single one of them. Then we will see where we are at the break because we want to win trophies.

“But we’re eight games in. We’re just loving the journey at the minute and long may that continue.”