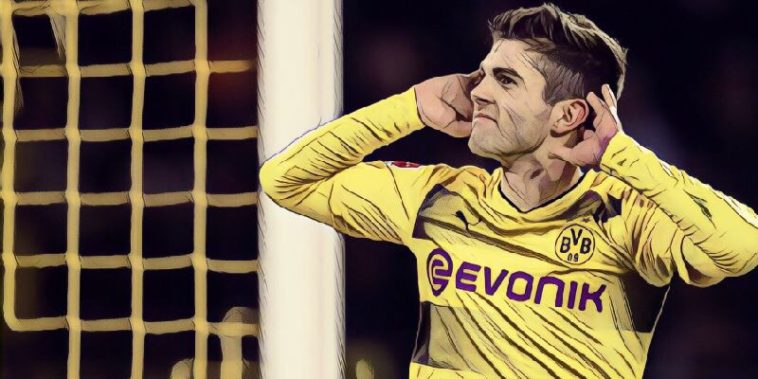 Christian Pulisic has been linked with a move to a whole host of Premier League clubs, but according to the players father, the rumours are ‘hogwash’.

The American moved to Borussia Dortmund three years ago, and his since gone onto develop into one of the most exciting stars in the Bundesliga.

His form has seen him linked with making a big money move to the Premier League, with Manchester United, Liverpool and Tottenham all thought to be interested in the 19-year-old. However, his father Mark Pulisic has denied that his son is close to making a move:

“He’s linked with a different club every week. I have no idea. His agent right now is working and looking, in close relation with me and Christian, and we’re just trying to see what the best phase of his next development will be.

“But there’s nothing concrete. Right now, Christian plays for Dortmund and that’s where he is planning on playing again next year.”

Asked if staying at Dortmund would be best for Christian’s development, Mark replied: “I don’t know. I wish I had the answer because life would then become very easy. But there’s always change. You can think one thing, then you do it, and at the end of the day it wasn’t the right thing.

“The only thing we can do is continue to talk with him and make sure he’s always in the loop of what’s going on, present all the facts and the content of what can happen, or will happen. It’s up to the player to make that final call.”