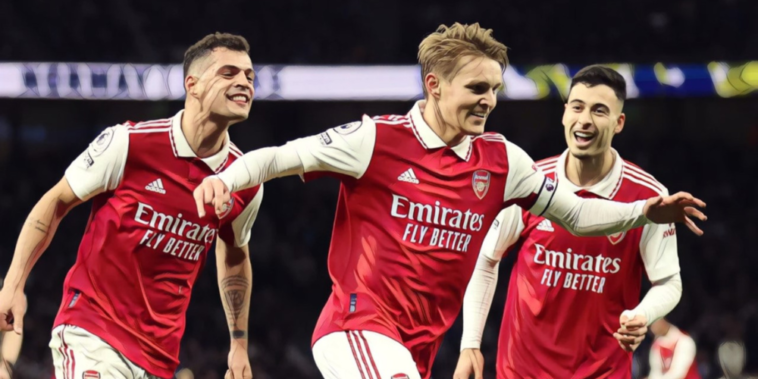 Liverpool’s season went from bad to worse after being thrashed at Brighton, while West Ham and Everton are beginning to sweat even more profusely over their Premier League status after costly defeats to relegation rivals.

Arsenal extended their lead at the top of the Premier League with a 2-0 win at Tottenham, earning North London bragging rights with a fine performance.

Mikel Arteta’s side controlled long periods of the clash, but were reliant on Aaron Ramsdale to come to their rescue on occasion. The 24-year-old made seven saves at the Tottenham Hotspur Stadium, becoming the first Arsenal goalkeeper to keep a clean sheet at Spurs since 2014.

Score if you can. 🛑 pic.twitter.com/uSsGcmMbTG

He twice denied Harry Kane with smart stops, before getting a crucial toe to Ryan Sessegnon’s low effort to divert it past the post. An outstanding performance from the goalkeeper at a time where Arsenal needed him most.

Aaron Wan-Bissaka’s performance in Manchester United’s derby win over Manchester City should not go under the radar, with the right-back’s resurgence continuing at Old Trafford.

Wan-Bissaka had featured for just four minutes in the Premier League before the World Cup break, but has grasped his opportunity since the season’s restart. Despite impressing since his return to the side, containing City’s attacking talent represented a tougher challenge than facing Nottingham Forest, Wolves, Bournemouth, Burnley and Charlton in recent weeks. It is one he passed with flying colours.

Wan-Bissaka combined his usual defensive determination with an encouraging performance further forward, showcasing some fine footwork in tight situations and linking well with teammates in the right channel.

He nullified the threat of Phil Foden and, after being written off and linked with an exit, could salvage his career with the club if this form continues.

The veteran defender is consistently one of Chelsea’s better performers and continues to defy time with performances of the highest quality as he approaches his 40’s.

Silva was excellent as Chelsea returned to winning ways against Crystal Palace, providing a presence in both boxes to help Graham Potter’s side to a confidence-boosting 1-0 win.

He dominated in the air and on the ground, winning all 11 of his duels against Palace and racking up seven clearances. No Palace player dribbled past the Brazilian, while he distributed the ball brilliantly with a 92% pass accuracy. Even at 38, he remains one of the best in the business.

Max Kilman produced his best performance of the season as Wolves climbed out of trouble with 1-0 win over West Ham.

The Julen Lopetegui era is up and running at Wolves, who leapfrogged West Ham in a congested bottom half and moved out of the relegation places.

Kilman was at the centre of a strong defensive performance from the home side at Molineux, as the centre-back made five tackles and eight clearances.

The 25-year-old’s combination of desire to defend and technical excellence is understood to have attracted interest from rival sides. More performances of this calibre will only increase his list of suitors.

Renan Lodi has taken time to find his feet in the Premier League but the Nottingham Forest loanee is fast becoming a favourite at the City Ground.

Lodi arrived with a fine reputation from Atletico Madrid and has begun to demonstrate his qualities in recent weeks, with Steve Cooper’s side up to 13th after one defeat in five games. The left-back shone in the 2-0 win over Leicester this weekend, producing some brilliant balls into the box and combating the threat of the Foxes’ forwards.

His full-back partnership with Serge Aurier has been a feature of Forest’s improvement in recent weeks, with positive signs that the club’s collection of summer recruits are beginning to gel.

Southampton are finding momentum under Nathan Jones and recorded a third consecutive win in all competitions at Everton this weekend.

The Saints were forced to come from behind in a relegation six-pointer at Goodison Park, with James Ward-Prowse’s double moving his side level on points with their beaten opponents.

Ward-Prowse was used in an advanced role and thrived, scoring the equaliser after some composed footwork inside the Everton box. His second came in familiar fashion, as the midfielder bent home a brilliant free-kick past England teammate Jordan Pickford.

It was Ward-Prowse’s 16th free-kick in the Premier League, with David Beckham’s all-time record (18) in his sights.

Arsenal’s win at Tottenham was another performance in which their captain purred, with Martin Odegaard in the form of his career right now.

Odegaard orchestrated the game from start to finish, providing his usual touch of calm and composure in the heat of a North London derby. Spurs struggled to pick up the Norwegian as he drifted into dangerous half-spaces between lines and were punished after standing off the midfielder in the first half.

The 24-year-old had one sight of goal pushed away by Hugo Lloris, but made no mistake with his second attempt as he rattled a low finish into the bottom corner.

What a season he's having 👏 pic.twitter.com/g05PUGZkYY

It was Odegaard’s eighth goal of the season – no Premier League midfielder has more – and fifth in his last seven games. A joy to watch in this form, his passing range scythed through Spurs.

March has been an under-appreciated part of an improving Brighton side for several seasons, but is beginning to take his fair share of the headlines. After ending a run of more than two years and 62 shots without scoring on Boxing Day, the winger has now scored four in four games after his double downed Liverpool this weekend – as many goals as he managed in his previous 157 Premier League appearances.

The 28-year-old was a menace all afternoon against a Liverpool side overwhelmed and outplayed at the Amex Stadium, with his second goal a superb finish as he lashed confidently past Alisson.

March has been transformed since Roberto De Zerbi’s arrival as manager and is a crucial cog in a well-oiled and slick machine under the new head coach. Graham Potter’s exit had been greeted with trepidation, but De Zerbi has the Seagulls looking upward and a place in Europe is a realistic goal this season.

Mitoma’s story is an incredible tale and he wrote a new chapter with a stunning individual performance this weekend, as the jet-heeled Japan international tormented Liverpool at the Amex Stadium.

Trent Alexander-Arnold and Joel Matip were given a torrid time as Mitoma ran riot down the left, his direct and decisive brand of football leaving Liverpool – a club in crisis right now – praying for the full-time whistle. The Seagulls have unearthed a diamond in the 25-year-old, whose pace and purpose in possession shone on the South Coast.

Kaoru Mitoma turned down a professional football contract at 16 in order to go to university. 👨‍🎓

He wrote his thesis on dribbling and his research involved fixing a camera to his head to record his movements to study which ones enabled him to get past opponents 🏃‍♂ pic.twitter.com/xXznmc24Mq

Every time the ball arrived at his feet, something looked likely to happen. He appears to be getting better and better.

Brennan Johnson piled the pressure on Leicester as his double earned Nottingham Forest a derby win this weekend.

Johnson has taken some unfair criticism this season for a 21-year-old in his first season at this level, but underlined his quality and potential with a brilliant brace at the City Ground.

The Wales international showed composure to round Danny Ward and roll in the opening goal, before netting his second with an excellent finish after being played in by Morgan Gibbs-White.

Brennan at the double! ✌️ pic.twitter.com/MFeK5o4HtU

That duo impressed in a live-wire front two for Forest, who are looking upwards after recording back-to-back wins for the first time this season.

Eyebrows were raised when Nottingham Forest smashed their transfer record to sign Morgan Gibbs-White from Wolves last summer, with the 22-year-old having failed to make an impression in the Premier League despite an outstanding loan at Sheffield United last season.

Gibbs-White has been a driving force in Forest’s recent improvement however, and provided both assists for Brennan Johnson as Steve Cooper’s side beat Leicester 2-0 this weekend. Cooper worked with Gibbs-White for England’s youth sides and the encouraging connection between the summer signing and Johnson will delight the Forest manager.

A brilliant watch at his best, Gibbs-White appears on an upward trajectory with regular minutes in the Premier League this season.