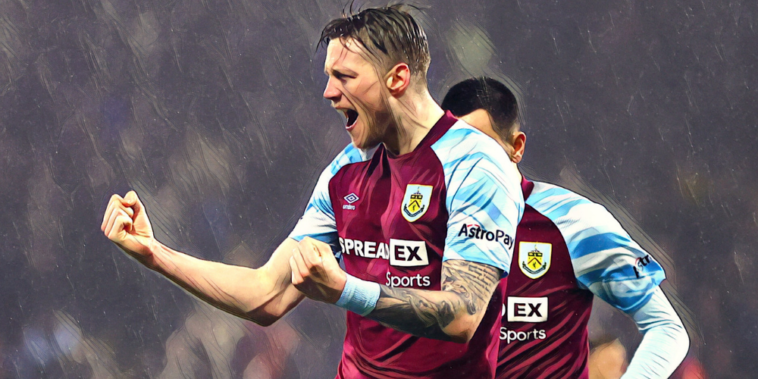 Each week we delve through the Premier League’s weekend action and compile our divisional Team of the Week, with the latest round of fixtures full of incident and excitement.

Tottenham secured a late win at Manchester City in a result that could have reignited the title race, whilst Manchester United edged a thrilling clash with rivals Leeds at Elland Road.

Elsewhere there were vital wins for Burnley and Watford in their battles to beat the drop, though West Ham lost further ground in the race for Champions League football next season.

Jordan Pickford was perhaps the one Everton name who could return from Southampton with a semblance of pride in his own performance, the goalkeeper ensuring his side weren’t embarrassed after a disappointing display.

The England international made nine saves at St Mary’s, including a wonderful stop from Tino Livramento to ensure the game remained goalless at the break.

It wasn’t ultimately enough as Frank Lampard’s side crashed to defeat, but the Everton boss will know his goalkeeper was responsible for preventing a battering on the South Coast.

Burnley secured their first away win of the season in fine fashion at Brighton, a brilliant performance lifting the Clarets off the bottom of the Premier League.

Connor Roberts was a stand-out performer for Sean Dyche’s side at both ends of the pitch, defending well throughout and getting forward to aid the attack.

The right-back hit the crossbar with a lovely curling effort from distance, before turning provider as Wout Weghorst slammed home his first goal for the club.

Cristian Romero is fast becoming Tottenham’s most important defender and the Argentine was superb in the north London side’s win at Manchester City, making a number of brilliant interventions including a wonderful clearance inside the final seconds.

Eric Dier’s return to the centre of the back three was important, but Romero was the leader of the Spurs’ backline and is beginning to demonstrate just why he was so highly coveted last summer.

Unfortunate to concede the late penalty, Harry Kane’s even later winner ensured Romero’s performance will be remembered in what could prove a vital win in Spurs’ season.

Dan Burn might have been an unfashionable signing for Newcastle during the January window, but he’s fast looking like a shrewd one for Eddie Howe’s improving side.

It’s six games without defeat for the Magpies after a 1-1 draw at Champions League chasing West Ham, in a game the visitors will feel could perhaps have delivered three points.

Burn was at the centre of another strong showing from Newcastle, the towering defender having instantly improved the spine of the side since his arrival from Brighton.

Valentino Livramento’s emergence this season has seen Kyle Walker-Peters move to left-back for Southampton, but the defender continues to impress amid regular first-team football at St Mary’s.

The 24-year-old is enjoying an impressive season and was excellent in the 2-0 win over Everton, bombing forward to find himself involved in Southampton’s best attacking moves.

Walker-Peters completed five dribbles and had four shots on goal against the Toffees, both leading totals as the Saints dominated against Frank Lampard’s side.

Arguably Southampton’s best player in the win over Everton, Romeu’s midfield partnership with James Ward-Prowse provides a strong blend of tenacity and technique for Ralph Hasenhuttl’s side.

The Spaniard was central to an impressive performance for Southampton and made a number of vital challenges and interceptions, whilst he drove forward well in the build-up to Stuart Armstrong’s opener.

The 30-year-old’s role is often influential as he screens the Saints’ backline and this was another example of his importance to the side. He remains one of the most underrated midfielders in the league.

Bruno Fernandes just loves playing Leeds, with the midfielder having now scored more goals against Marcelo Bielsa’s side (6) than any other club he has faced in his career.

Fernandes was at the centre of Manchester United’s entertaining 4-2 win at Elland Road this weekend, scoring one and creating another as the Red Devils continued their push for a top four finish.

Most chances created in the Premier League this season:

We Don't Talk About Bruno. pic.twitter.com/BigeO3L0Kl

His assist for Anthony Elanga was brilliant, an inventive piece of skill and show of desire to play in the teenager for the fourth goal. He has now has 25 league assists since his arrival at Old Trafford, more than any other Premier League player.

Tormented his opposite full-back for much of Liverpool’s 3-1 win over Norwich, as Jurgen Klopp’s side came from behind in a below-par performance at Anfield.

Salah saw a headed effort cleared off the goal-line before scoring the Reds’ crucial second, taking down Alisson’s long pass before rounding the goalkeeper and firing past the retreating defenders for his 150th goal for Liverpool.

Salah’s goal was a moment of individual brilliance from the Egyptian and helped turn the tide for the Reds, who closed the gap on the league leaders and raised hopes of a potential title race.

Son has been a menace to Manchester City in recent seasons and again haunted the Premier League champions, who struggled to contain the speed and work-ethic of the South Korea international.

Son ended Spurs’ 3-2 win at the Etihad with two impressive assists, first beating the offside trap to race away and unselfishly tee up Dejan Kulusevski for the opening goal.

⚪ @SpursOfficial duo Harry Kane and Son Heung-min have now assisted one another for 36 #PL goals, the joint-most of any pairing in the competition's history, moving level with Didier Drogba and Frank Lampard 🤝#MCITOT pic.twitter.com/xn37KQFNcT

The 29-year-old then crossed for Harry Kane to score a second for Spurs, as the duo levelled Didier Drogba and Frank Lampard’s all-time Premier League record for goal combinations with 36.

Spurs needed a result and performance this weekend after a run of poor form and it was typically Son and Kane who came to the fore to inspire their success.

There was good reason why Manchester City chased the signature of Harry Kane last summer, with Pep Guardiola no doubt casting an envious glance towards Spurs after the forward’s clinical performance reignited the Premier League title race.

Kane’s passing and finishing were outstanding, including a sweeping ball into the path of Son Heung-Min in the build-up to the visitor’s opening goal at the Etihad. Kane then slammed home a second, before rising to head home a stoppage-time winner and secure Spurs all three points.

The England captain even had another effort ruled out as he was denied a hat-trick, a complete centre-forward performance from the 28-year-old and a welcome return to his finest form.

Sean Dyche has praised the performances of Wout Weghorst since his arrival into the Premier League last month, with the forward looking the ideal target to lead Burnley’s bid to survive.

The towering forward has not scored the goals his effort has deserved during his opening appearances for the Clarets, but opened his account in emphatic fashion as Burnley beat Brighton in convincing style at the Amex.

The Dutchman then turned provider to set up Josh Brownhill for the second and his presence unsettled the Seagulls throughout, giving Shane Duffy in particular a torrid time.

Having brought in the 29-year-old for less than half of the £25m received from Newcastle for Chris Wood, Weghorst’s arrival from Wolfsburg looks like astute business from Burnley.