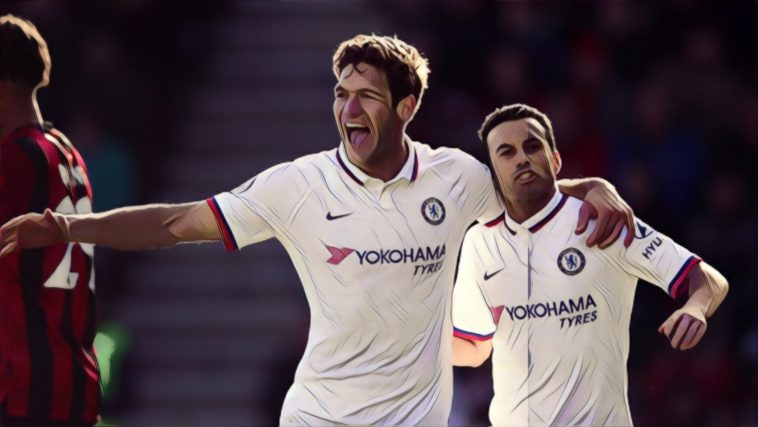 There will be no invincible campaign as Liverpool’s unbeaten run came to a dramatic halt at struggling Watford, whilst bottom-of-the-table Norwich breathed new life into their survival fight by beating Champions League chasing Leicester in a weekend of shock results.

Elsewhere West Ham moved out of the bottom three with a crucial home victory, whilst Wolves closed the gap on the top four by beating injury-hit Tottenham in a thriller on Sunday, with Man Utd and Chelsea dropping points.

It’s that time of the week again where we compile our dream XI from the weekend’s action, here is our Premier League Team of the Week:

It’s now six games unbeaten for Burnley following their goalless stalemate at Newcastle, Sean Dyche’s side within just four points of the European places following their up-turn in form in recent weeks.

The Clarets have kept four clean sheets in that time with goalkeeper Pope moving into the lead for the Premier League’s Golden Glove award, his total for the season now standing at 11, and the 27-year-old will be eyeing a position as England’s number one given Jordan Pickford’s indifferent showings of late.

Pope rarely looked troubled in keeping another shut-out at St James’ Park this weekend, possessing a clean pair of hands when called upon in a confident display.

The ‘Irish Cafu’ continues to be one of the most effective attacking full-backs in the Premier League, Doherty having hit an impressive run of form with two goals and three assists in his past four appearances in all competitions.

Doherty impressed as Wolves secured a huge result in their bid to reach the Champions League against Tottenham, scoring his side’s first of the afternoon before providing an assist for Diogo Jota as Nuno Espirito Santo’s side twice came from behind to win in north London.

An imperious display from the Watford defender as the club became the first to keep a clean sheet against champions-elect, Liverpool, this season, the Hornets ending the Merseyside club’s unbeaten record in fine style on the back of a solid defensive showing and a relentless attacking display.

Kabasele was crucial to the club’s shut-out, sniffing out any danger posed by the visitors and handling the responsibility of marking the towering Virgil van Dijk at set-pieces admirably. The 29-year-old refused to give the reigning PFA Player of the Year an inch, setting the tone for his teammates on a stunning evening for Nigel Pearson’s side.

Crystal Palace‘s free transfer capture of Cahill from Chelsea must rank amongst the shrewdest signings of last summer’s transfer window, the veteran having added both experience and quality to the Eagles’ defence.

Roy Hodgson’s side earned back-to-back wins courtesy of a hard fought victory over rivals Brighton, moving further away from danger courtesy of a resilient defensive performance at the Amex Stadium.

Cahill was at the heart of the win, marshalling the defence superbly as Palace kept a second successive clean sheet.

Marcos Alonso’s Chelsea career seemed to be heading towards an end after falling out-of-favour under Frank Lampard, though the full-back’s contribution in recent weeks could lead to a re-think from the Blues’ boss.

After scoring a crucial goal in the victory over Tottenham last weekend, Alonso was the hero once again with a predatory brace during the club’s 2-2 draw at Bournemouth, a result that keeps the west London side narrowly ahead of their rivals in the race to secure a top-four finish.

The Spaniard’s defensive awareness remains a concern but he produced a much-improved performance against the Cherries, Alonso thriving in a back three system and rediscovering his goalscoring touch of late.

Jamal Lewis’ stunning goal may have grabbed the headlines as Daniel Farke’s side stunned the Champions League chasing Foxes 1-0 at Carrow Road, but amongst several strong performances it was arguably the showing of captain Tettey that helped seal a huge three points.

The veteran midfield was named as the Premier League’s Man of the Match following an all-action display, covering every blade of grass to will his side over the line. The Canaries next face Southampton at home and are still to play three of the five sides directly above them, their win this weekend sparking faint hopes of an unlikely late charge towards survival.

Post-match tunnel vibes including when Tetts found out he was named Sky's man-of-the-match! 😂 pic.twitter.com/iAZ9eDfXXL

West Ham‘s capture of Fornals from Villarreal last summer brought much anticipation, and after a slow adaptation, the midfielder has begun to show signs of his class in recent weeks.

The Spanish international followed his goal at Liverpool with a fine performance in the Hammers’ win over Southampton, demonstrating his creative talents with two superb assists to take his tally to five for the season.

The 24-year-old has the ability to unlock defences, a trait which could be crucial to David Moyes and the club’s survival chances.

Watford’s club-record signing has enjoyed an up and down debut season in English football, though there is undeniable talent in the Senegal winger and he was a constant thorn in the side of league leaders, Liverpool, as their unbeaten record came to an abrupt and unexpected end at Vicarage Road this weekend.

Sarr returned from a hamstring injury to star for Nigel Pearson’s side, his pace and direct running a constant threat throughout for a shellshocked Reds defence. The 22-year-old was simply sensational in a vital win for the struggling Hornets, scoring twice and providing an assist to earn a much-deserved standing ovation from the home crowd.

Ismaila Sarr is the first player to score a brace against Liverpool in the Premier League this season.

An evening he will never forget. 🐝 pic.twitter.com/V0LyoKl9B0

In truth, any of West Ham’s front four could have earned their selection into our side this weekend, David Moyes’ attacking quartet helping to secure a potentially crucial result in the club’s fight for Premier League survival.

We’ve opted for Antonio on the left-hand side of our midfield, the winger at his direct best during the Hammers’ 3-1 win over Southampton at the London Stadium. Antonio may not be the most fashionable footballer in the top flight but his pace and power are a threat to any opposing defence, his former side failing to cope as he helped himself to a goal and an assist.

Moyes will hope he has stumbled upon his best side following the performances of Antonio and new signing Jarrod Bowen, West Ham moving outside of the division’s bottom three on goal difference.

The Watford club captain epitomises the fight manager Nigel Pearson has attempted to instil in the side since his arrival at the club, with the forward at his menacing best to bulldoze a battered Liverpool defence this weekend.

Deeney admitted afterwards that he deliberately targeted the often maligned Dejan Lovren as the two contested for each loose ball, a battle the uncompromising star duly won.

The 31-year-old added to a typically robust performance with a beautifully taken third goal, having earlier provided an assist for the electric Sarr on a memorable evening at Vicarage Road.

Back-to-back inclusions in our Team of the Week for Jota, the forward enjoying a brilliant run of form in front of goal at present.

The Portuguese international has scored six goals in his past three appearances across all competitions, whilst his intervention against Tottenham could prove crucial in Wolves’ bid to secure a top-four finish.

Diogo Jota has now scored in each of his last three games across all competitions:

The 23-year-old scored a crucial equaliser to level at the Tottenham Hotspur Stadium, before turning provider for Raul Jimenez to fire the winner in an entertaining 3-2 comeback victory.

Wolves look to be the form side in the race for the Champions League at present, their rise in recent seasons continuing in fine style.