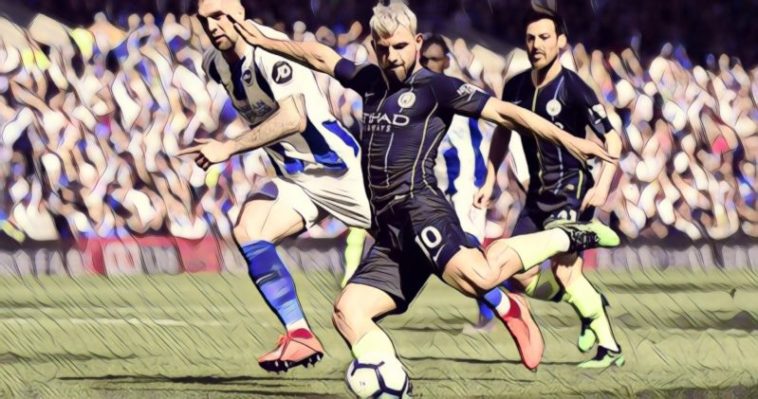 As the final weekend of Premier League action passes us by, it’s time to take stock and decide which players were a help or a hindrance to their sides over the weekend.

Another day, another huge goal for the Argentine. For 81 ludicrous seconds at the Amex Arena, Manchester City were behind at Brighton and second in the table.

Aguero had other ideas though and rattled home a crucial equalizer to bring things back under control. City owe so much of their recent success to this man and you wonder if things may have started getting more jittery had the number 10 not applied his bit of magic. There is surely room in their kitty for that statue now.

Southampton may well have earner safe passage to another season of Premier League, but they will still be slightly gutted with this end of season draw with Huddersfield. The final day blushes though belong to Mr Gunn, who may well have had his mind on sun, sea and sangria as he hesitated with an easy back pass and under no real pressure, lost possession and allowed Alex Pritchard in for a daft and unlikely equalizer. Put that one down to an end of season brain fart!

You’d have thought, swapping Valencian sunshine for drizzly Croydon would be a bit of a turn off for an international footballer, but, credit where it’s due, Michy Batshuayi seems to have taken to South London very well.

His tidy brace against Bournemouth on Sunday takes the on-loan Chelsea forward to six goals in 13 appearances for the Eagles, which next to Christian Benteke, is an outright prolific return! He could well have given Chelsea something to ponder for next season as they weigh up their options amid the acrimony of a transfer ban.

Oh Paul! Another weekend to forget for the Frenchman, who took an earful from the home fans at the end of another morale-sapping defeat at Old Trafford. He was singled out by supporters for his abject failure to track back and look bothered for either of Cardiff’s goals on the break.

Despite being United’s top scorer this season, Pogba has notched just two in 15 games and has reverted back to his muted performances on the periphery of matches. You could sense the frustration and anger from the home fans as they applauded their player’s gloomy lap of honour at full time.

Speaking about Pogba’s lack of desire to track back Alan Shearer said on MOTD: “…it epitomises everything that is wrong with this football club and football team.” Damning Words indeed from Mr. Monotone.

Arsenal’s Roy of the Rovers just pips Sadio Mane in our illustrious weekly feature this time out. Aubameyang has had a seminal week to be fair. His performance against Valencia was masterly, scoring a wonderful hat-trick and showcasing why he is still one of the most potent forwards in European football. He capped this off by registering a further two more goals on Sunday, bagging him the golden boot for the season, albeit, as a shared award.

The Gabon international is one of the few players capable of taking the Gunners forward to the next level they so desperately crave. If only they had a defence worth talking about, Arsenal could well have pinched a top-four spot from their North London rivals.

In fairness, this could have been any one of Fulham’s back four on the basis of yet another dire defensive showing. Le Marchand get’s in this time though, as the Frenchman put in yet another awe inspiring, shoddy display. The former Nice defender is at the heart of a woeful defensive unit and he inspires only chaos for Fulham, who shipped a damning 81 goals in 38 games.

So it was again on Sunday as Newcastle ran rampant through the heart of their opponent’s defence to score twice inside the first 11 minutes. Le Marchand offered no leadership or positional nous that would have at least hinted at a coherent approach to the fine art of defending. Scott Parker will have one hell of a rebuilding job on his hands if he is to stop the goals flying in next season.