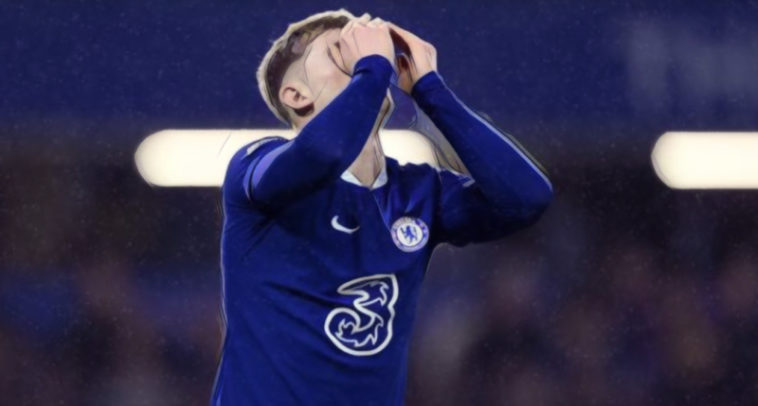 Graham Potter’s difficulties at Chelsea increased tonight after the English coaches’ side lost 1-0 to Man City at Stamford Bridge.

Despite their poor recent form, Chelsea began in impressive fashion and Christian Pulisic looked set to give them an early lead, but Man City centre-back John Stones denied the American with a brilliant last-ditch tackle.

Pep Guardiola’s City side looked strangely off the pace although goal-machine Erling Haaland almost opened the scoring with a sharp turn and strike that whizzed past the post.

Just before the break, Chelsea came close to taking what would have been a deserved lead, but substitute Carney Chukwuemeka’s deflected effort came back off the post with Ederson beaten all hands down.

Guardiola must have read his side the riot act at half-time as they emerged a different team and within minutes of the restart, both Kevin de Bruyne and Nathan Ake nearly opened the scoring.

Just shy of the hour mark Guardiola brought on Riyad Mahrez and Jack Grealish as he looked to turn the screw on Chelsea and within a few minutes, his side was a goal ahead. De Bruyne powered forward before sliding it out wide to Grealish on the left, with the England attacker promptly delivering a perfectly weighted low ball across goal for Mahrez to tap home at the back stick.

On 72 minutes it looked like City would kill the game off only to see Haaland fall a couple of inches short of directing a de Bruyne cross into an empty net.

An injury-ravaged Chelsea pushed on in hope of finding an equaliser but City held on comfortably to win and keep the pressure on Mikel Arteta’s Arsenal at the top of the Premier League table.

Speaking afterwards Blues boss Potter praised his side’s commitment, but did admit they are going through a tough patch.

“When you consider everything losing Raheem [Sterling] and Christian [Pulisic] so early, the lads gave everything. It was a spirited performance against a top team, so apart from the result I’m proud of the players,” Potter told Sky Sports.

“It’s tough at the moment I must admit and I feel for the boys. We have to stick together. It was disappointing to lose those guys but the players on the pitch and the ones that came in gave everything and that’s all you can ask for.

“We can’t complain about it [the injury list] We just have to get on with it. The boys on the pitch gave everything and did what we asked them to do and Manchester City don’t give you much.

“We had to freshen it up but Lewis [Hall] and Amari [Hutchinson] are young players starting out and Conor [Gallagher] gave everything, it was nice to have that personality from the bench.

“You always have to take responsibility but you hope people look at the whole context and see where we are and what we have had to deal with but at the same time emotions are high and you have to try and ride out any storm and try to stay level. The crowd were behind the team and could see them doing everything.”