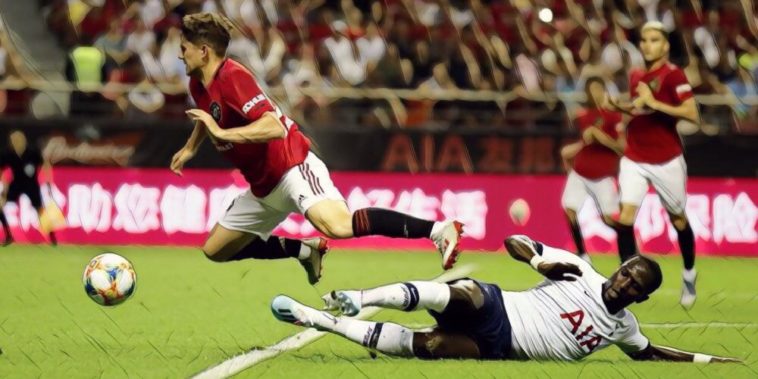 Mauricio Pochettino has apologised to Manchester United about the behaviour of his players in this afternoon’s robustly contested ‘friendly’ in Shanghai.

The two Premier League sides met in the sweltering Chinese heat in a game that, at times, was friendly in name only, with a number of players taking the opportunity to get stuck in.

Spurs‘ Moussa Sissoko was caught on camera with what looked like a stamp on Manchester United new boy Dan James, something which resulted in a bit of handbags between a few players.

While Sissoko would probably have seen red in a Premier League game, his challenge only saw the awarding of a free-kick, although the Chinese referee did see the need to later brandish yellow cards to Dele Alli and Andreas Pereira.

Moussa Sissoko being a sh*t-house again and stamping on Dan James.

In a pre-season game as well 👀👀 pic.twitter.com/4AaSzDpOpd

Speaking after the game, Mauricio Pochettino offered his apologies to Ole Gunnar Solskjaer’s side for their aggressive play.

“I apologise to Manchester United on behalf of our players,” said Pochettino.

“I was a little bit annoyed about some situations. I was not happy because sometimes you can arrive late and something can happen.

“Sometimes you need to be aggressive and play with passion but the focus is on building our fitness and developing the way we want to play.”

However, Solskjaer had no problem with the physicality of the game, saying it was good preparation for what lies ahead while also admitting his own side didn’t hold back either

“I have no qualms,” said the Norwegian. “It is a competitive sport and we are preparing for the league. There was no tippy-toe football.

“You went in for a tackle. We didn’t just receive. We gave as well. I thought it was a very good game.”

United ran out 2-1 winners thanks to goals from Anthony Martial and Angel Gomes, with Lucas Moura’s deflected strike having drawn Spurs level.