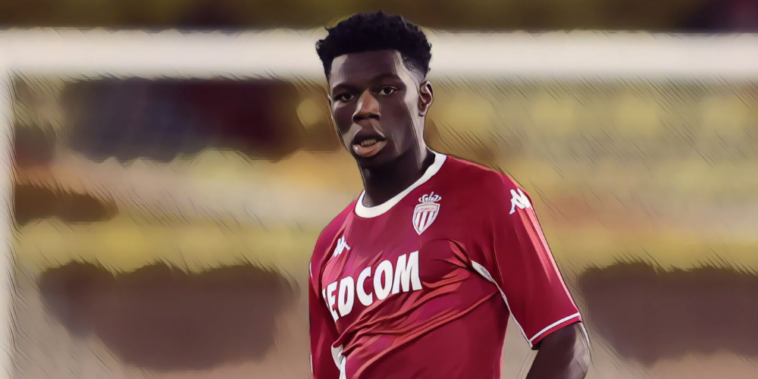 Despite PSG’s dominance in the league for much of the past decade, Ligue 1 continues to produce some of the best young players in European football. French teams consistently unearth precocious talents through intelligent scouting and develop them superbly in both their academies and first-teams.

AS Monaco are notorious for their track-record of enabling young players to flourish, and 21-year-old midfielder Aurelien Tchouameni is the crown jewel of their current crop of talents.

Under former Bayern Munich boss Niko Kovac, Monaco play in a possession-based, high-pressing 3-4-3 or 4-4-2. Tchouameni plays as the anchoring player in the midfield double pivot, usually alongside the energetic Youssouf Fofana. His 12 appearances in Ligue 1 after just 13 match days reflect how central he is to Kovac’s system and tactical approach.

Tchouameni is extremely well-rounded technically, allowing him to contribute to Monaco’s ball progression in a variety of ways. As they build from the back, Kovac instructs the centre-backs to look for short, central passing options when possible, rather than trying to play through the flanks.

Tchouameni is frequently able to escape opposition cover shadow and pose as a passing option. While part of this is because of his awareness of the vacant space on the pitch, he’s also comfortable at receiving the ball under pressure and at a variety of angles. His body positioning when obtaining possession allows him to shield the ball from challenges well, with his physical strength and 6’1″ frame also helping in this respect.

Once he’s controlled the ball, Tchouameni is a proactive passer who will attempt riskier passes that progress play forwards as opposed to safer lateral or backwards passes. This leads to him turning over possession somewhat frequently, especially because he can dwell on the ball and invite unnecessary pressure upon himself.

However, his passing quality and ability to play short and medium-range penetrative passes mean that this tradeoff is worth taking. He may not retain possession as well as other defensive midfielders, but Tchouameni is extremely progressive and allows his team to move through the thirds reliably.

The Frenchman is also an above-average ball-carrier. He only attempts 1.15 dribbles per 90, but completes them at an 83% success rate. Tchouameni’s acceleration and physical strength mean he is hard to stop when he drives forward with the ball, but because of his need to stay close to the back four to protect them defensively, he tends to not utilise this aspect of his play frequently. Still, it can be a useful avenue for Monaco to progress the ball forward when needed.

Defensively, Tchouameni stands out as an elite ball-winner. For metrics such as pressures, tackles, interceptions, and aerial duels won, he ranks among the best performing midfielders in Europe’s top five leagues. Monaco press high and aggressively in a 4-2-4 shape, meaning Tchouameni needs to cover large swaths of space behind the first line of the press.

Aurélien Tchouaméni has made more tackles + interceptions [25] than any other player in the #UEL this season.

Such an exciting talent. 🇫🇷 pic.twitter.com/4cV22PPdDG

His understanding of when to push up and support the press from behind and when to drop back to cover the space in front of the back four is one of his less visible defensive traits, but it’s vital to his ability to perform his defensive role.

Tchouameni’s athleticism is also crucial to his defensive style. His long legs give him extended strides and enhanced coverage with his tackles, making him difficult to evade in one-on-one scenarios. His combination of agility over short distances, pace over long distances, and physical strength make him a dominant defensive presence.

😯 He is 21 and it was his breakthrough year… pic.twitter.com/vOOxYxOKQ1

Given his duel threat both with and without the ball, it’s no surprise that the likes of Chelsea and Manchester United have expressed significant interest in Tchouameni’s signature.

Joining Thomas Tuchel at Chelsea would be a sensible decision for the Frenchman on multiple levels. Beyond the fact that he would be working with one of Europe’s best coaches, Chelsea’s tactics are similar enough to Monaco to ease his transition into English football. He could bring greater height and physicality to Chelsea’s midfield without comprising their technical proficiency.

Moving to Manchester United would ensure Tchouameni more game time given their lack of defensive midfielders. Nemanja Matic is the only other specialist holding midfielder, while Fred and Scott McTominay are better in box-to-box roles with a less defensively rigid role. Given the precarity of Ole Gunnar Solskjaer’s role and their lack of a clear structure in possession, it may be a less attractive option for the 21-year-old.

Wherever he ends up, Aurelien Tchouameni is among the best young defensive midfielders in Europe at present, the prototypical modern number six who influences his team both in and out of possession.