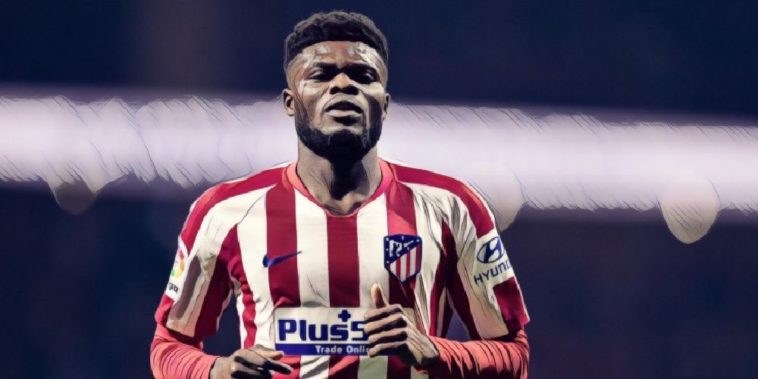 Atletico Madrid midfielder Thomas Partey is reportedly ‘keen’ on a move to Arsenal, yet the player will not actively push for a move as the Gunners struggle to meet his release clause.

The 27-year-old has emerged as one of the most effective defensive midfielders in Europe in recent seasons under manager Diego Simeone and has been earmarked as the man to strengthen Arsenal‘s midfield.

With Granit Xhaka still a controversial figure at the club and young Frenchman Matteo Guendouzi seemingly out of favour under new boss Mikel Arteta, the need for a high profile name in the centre of the park is of paramount importance.

However, according to Goal, despite the Ghanian being ‘keen’ on a move to North London, the club are at present unable to match the player’s £44m release clause – with the La Liga side offering little wriggle room over the player’s valuation.

The FA Cup winners have already made significant moves this summer, plucking young central defender Gabriel Magalhaes from Lille for £27m as well as his Brazilian compatriot Willian from Chelsea on a free transfer. With star striker Pierre-Emerick Aubameyang also in talks for a new deal at the club, finances at the Emirates are potentially running thin.

Arsenal have already announced the controversial decision to make 55 staff redundant due to the current economic situation and may be forced to move players on before any new deals can be struck.

Mikel Arteta and co have already begun something of a clear-out, with former Manchester United playmaker Henrikh Mkhitaryan sealing a permanent move to AS Roma, while the likes of Sokratis, Sead Kolasinac, Shkodran Mustafi and forward Alexandre Lacazette have all been linked with potential departures from the Emirates.

With the transfer deadline of October 5th offering plenty of time for a resolution to be made, a move for Partey is certainly not out of the question.