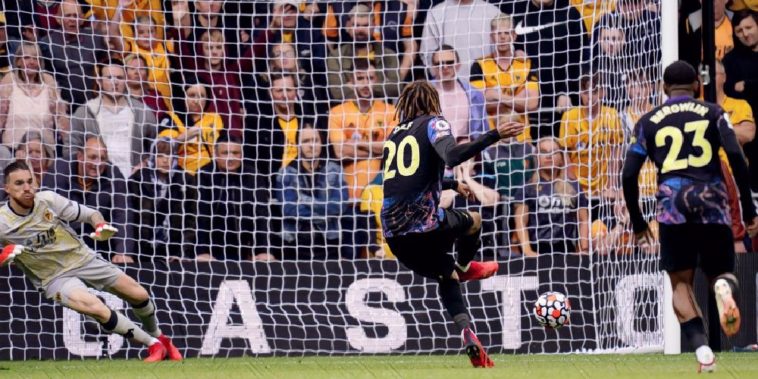 Nuno Espirito Santo made his first return to Molineux following his departure at the end of last season, and steered his new club to a 1-0 win on his old stomping ground.

The Portuguese had steered Spurs to a somewhat unexpected 1-0 win in his first Premier League game in charge, beating reigning champions Man City at the Tottenham Hotspur stadium, only to see his side beaten in his homeland by Pacos de Ferreira in their Conference League playoff first leg on Thursday,

They would however get off to a quick start in the Black Country, taking the lead in just the ninth minute. Dele Alli got to the ball first before being brought down by Wolves ‘keeper Jose Sa, the Englishman stepping up and netting the resulting penalty.

It would however be Bruno Lage’s side who would dominate large swathes of the game, and they would have by far the most attempts (25 to Spurs’ 8), with Adama Traore a particular threat throughout, though would be unable to find a way through the visitor’s backline and past Hugo Lloris.

Much of the summer headlines have been focussed on the future of Harry Kane, though the forward was named among the substitutes for the first time this campaign.

The wantaway striker would eventually be introduced to the action with 19 minutes left to play, and the England skipper saw a chance to double the lead thwarted by Sa just 10 minutes after entering the action, one of four excellent second-half saves by the Portuguese ‘keeper.

While it wasn’t the most convincing of victories for Spurs, they are just one of three teams to win both of their opening fixtures as they bid to build on a disappointing couple of campaigns.

Speaking to Sky Sports after the game, Nuno was delighted with the ‘attitude’ of his side, praising the resolute defensive performance of his side.

“Relentless, compact, solid, a unit – everybody helping each other because it was tough from minute one, but we defended very well. In terms of attitude, I am very proud. When you are not able to do a lot of things, you do what you have to do take what we came here for.

“We started well, had a couple of movements that were really dangerous – the second half much better, we had more and had clear chances to kill the game.

“But Wolves, credit to them, they are a strong team. This is about trying to adapt and realise what the game asks for. It is a team you cannot lose the ball in the middle of the field against, one time we did that it was one v one against Hugo [Lloris]. He did his job!

“We had two tough matches, very demanding opponents, so we are growing and have a lot of things to improve and work on.”