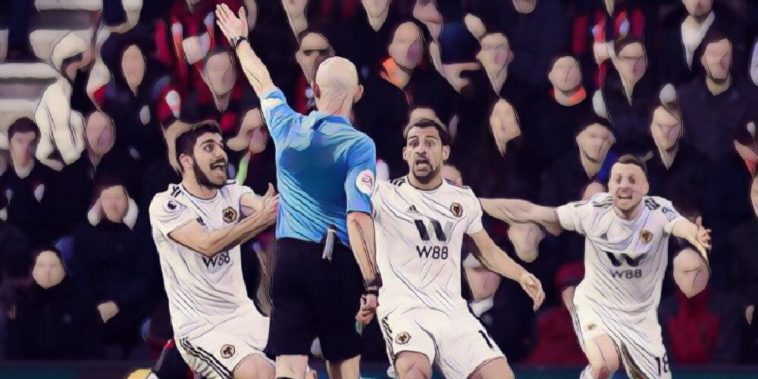 Nuno Espirito Santo refused to discuss the performance of referee Roger East after he awarded three penalties in this afternoon’s 1-1 draw against Bournemouth.

Bournemouth were given the chance to regain the lead just two minutes later, but Norway international King was unable to double tally with his second penalty kick of the afternoon being sent wide to see the feisty encounter on the South Coast finish 1-1.

“I wouldn’t say [it was a] bizarre [game], that’s too strong, it was an emotional game. The players gave everything,” the Portuguese manager told the BBC.

“We dig deep in the second half. Both teams could win but the draw says that it was a competitive game and a good spectacle.”

“Football is not always fair, it was a very competitive and emotional game against a very tough team. Eddie Howe is doing a fantastic job.

“When incidents happen in the game you cannot lose focus. Until the first penalty we were on top but then we lost composure and we must improve.

“It is a very difficult task for referees. I don’t want to talk about VAR, as long as the officials are fair nobody can complain.

“You cannot judge anything from the reaction of players to incidents. We tried everything to score, we were never happy with the draw.

“Joao Moutinho is bleeding heavily from his mouth, he was not happy at all and when a short man is angry it’s tough.”