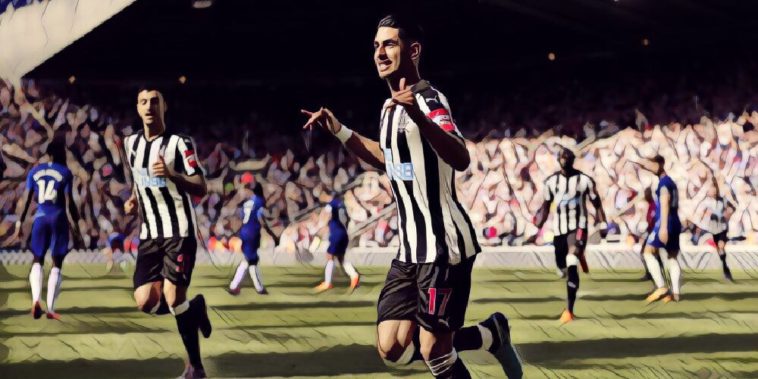 Dwight Gayle’s 23rd minute goal and a brace from Ayoze Perez destroyed Chelsea’s Champions League hopes as Newcastle clobbered the Blues in a 3-0 victory at St. James’ Park on Sunday.

The final day of the 2017–18 Premier League season has ended in heartbreak for the visiting Blues who will be playing European football in the Europa League next year. Meanwhile, Newcastle finish 10th in the table after spent last season in the Championship.

Here are five things we learned from Newcastle’s win over Chelsea.

Chelsea surely knew everything had to fall into place to earn a Champions League spot. They had to do their part in taking all three points against Newcastle while hoping Brighton upset Liverpool at the same time.

Yet, Chelsea’s first 45 minutes didn’t even result in a single shot. You’d think that a team that needs a win would press for a win, even if they can’t control the Liverpool outcome.

Ironically, the new marketing slogan for Chelsea’s new Nike kits is “Expect thrilling”. Blues fans surely can’t be thrilled with the way their club performed throughout the season. The Newcastle match just summarised the entire season in one game and one word – disappointment.

I expect thrilling next season because Chelsea have a decent team. I just expect a different manager leading them to Thursday night matches in the Europa League.

Too little, too late

Chelsea did somewhat turn up the attack in the second half. By turn up, I mean they attempted their first shot after 51 minutes.

I want to say something cliché like “better late than never”, but this is another prime example of Chelsea’s season as a whole. The Blues have to be in a state of panic to come close to getting results. Once Chelsea had to chase the game against Newcastle, they increased the attacking pressure. Unfortunately, it led to two more Newcastle goals.

Most Chelsea fans gave up on Champions League qualification a while ago, but at the end of the season Chelsea turned up and came close to usurping Tottenham and Liverpool. Had they not lost to Bournemouth, Burnley, Crystal Palace, Watford, and/or West Ham this season, the table could’ve have looked significantly different.

The Chelsea win against Liverpool gave hope to the Stamford Bridge faithful, and then negative results to Huddersfield and Newcastle promptly destroyed any chances of miracles.

Newcastle returned to midtable of the top division after a short stint in the Championship. While Rafael Benitez wasn’t able to save the Magpies from relegation after joining them mid-season in 2016, he has brought stability back to Tyneside with a first-place finish in the Championship and 10th place in the Premier League this season.

In matchweek 18 this season, the Magpies were in the relegation zone, down in 18th place, but they have improved in the second half of the season to finish in the top half of the table. Newcastle fans should have a lot to look forward to, especially if Benitez is offered a contract extension.

Simply put, a lack of goal output has thrown Chelsea’s season into shambles. They were held scoreless in eight of their matches. Last season, they were only shut out three times in losses to Arsenal, Tottenham, and Manchester United.

The Blues racked up 85 goals in the 2016–17 Premier League campaign, but they were only able to muster 62 this season. Alvaro Morata couldn’t match Diego Costa’s goal tally, even though Costa was not in-form for the latter half of the previous season. The tactics that seemed magical last season have been figured out by the rest of the league.

I reiterate that Chelsea’s team is good on paper, but they will need to innovate for next season in order to remain competitive.

While the league season has stumbled to completion for Chelsea, they still have one more game to go. The FA Cup final is set for Saturday, May 19 against Jose Mourinho’s Manchester United.

May 19 is an important date for Chelsea. On that very day in 2012, Chelsea won the Champions League over Bayern Munich. That season, Chelsea also stumbled to the finish line of the Premier League in sixth place. Funnily enough, Newcastle finished above them in fifth.

Nobody cared about the league finish because Chelsea lifted the one trophy that everyone wanted. It also secured Champions League qualification for the following season as title holders.

This year, an FA Cup win won’t sweeten the sour notes of the season. Winning one of the oldest football tournaments in the world won’t qualify for the Champions League. But something is better than nothing, and Chelsea have one more chance at finishing on a high note.