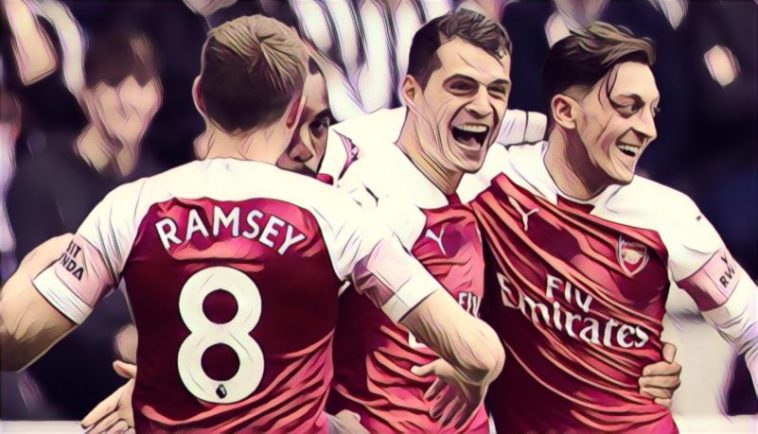 Unai Emery’s Arsenal recorded their third consecutive victory in the Premier League as Arsenal defeated Newcastle United 2-1 at St. James’ Park. Here are five things we learned from the game.

A game of two halves

The game ended 0-0 in the first half and it looked like Arsenal were going to have a really tough fight if they were to take anything from the game. Newcastle played really well, constantly threatening Arsenal’s defence, but their attacking moves could not be converted into goalscoring opportunities.

Mustafi made a silly error just after the half hour mark creating a very good chance for Newcastle but Murphy could not get the better of Sokratis. Arsenal on the other hand, were trying a lot but were just not clinical enough. The introduction of Lucas Torreira in the second half changed the game for Arsenal. The Gunners looked a different team after the break and scored two goals in quick succession to ruin any of the first half momentum that was left for Newcastle.

Five games into the season and The Gunners are still searching for their first clean sheet. The defence has been a major problem for Arsenal this season as the Gunners have conceded nine goals already in their first five games.

Every time Arsenal play the ball backwards towards Petr Cech, it looks as if they are about to concede. And that is just one of Arsenal’s many defensive problems. Emery needs to sort these problems out before the Europa League starts if Arsenal were to have any realistic chance of winning it.

Five games into the season, two of Arsenal’s first names on the team sheet are looking terribly out of form. Aubameyang, who was bought by Dortmund in January managed to get into double figures quickly last season but has looked a completely different player this season.

Things are not looking good for Aubameyang, who has only netted once this season. And if it continues like this, it won’t be long before he finds himself on the bench. As for Ramsey, he has also been equally bad this season. Known for scoring through his runs penetrating the defence, Ramsey has done everything but that this season. The Welshman will have to step up soon, with the likes of Mkhitaryan and Iwobi closely watching from the bench.

Newcastle are 18th in the Premier League table having picked up just one point in five games. This is the first time since 1987 that Newcastle have lost all three of their home games of the season. However, Rafa Benitez’ team knows that all these games were against tough opponents: Spurs, Chelsea and Arsenal. And the good news for The Geordies is that they only face one top six team between now and Boxing Day. So they can now finally start collecting some points.

Still no start for Torreira

Lucas Torreira was expected to get his first start in Arsenal colours. But the Uruguayan was once again left on the bench by Unai Emery who started the midfield duo of Granit Xhaka and Matteo Guendouzi. Torreira did come on at half time though, after a frustrating first half for Arsenal.

The midfielder made instant impact and The Gunners scored two quick goals to gain a clear advantage over Rafa Benitez’ men. Torreira has come on as a substitute in all of Arsenal’s games, and has not put a foot wrong yet. But somehow, the midfielder still cannot get his first start in Arsenal colours.