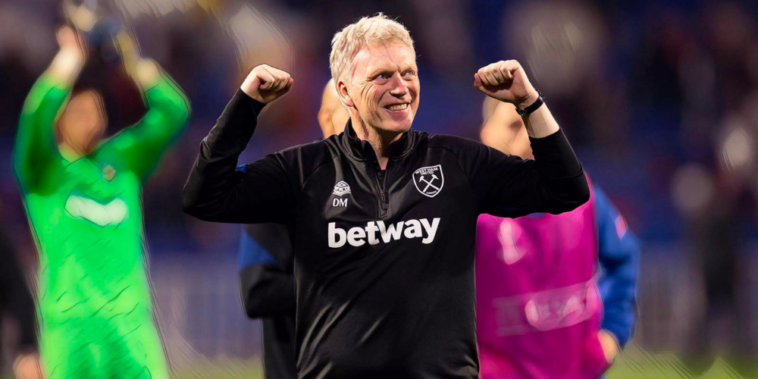 David Moyes wants West Ham’s players to believe in themselves after the club reached the semi-finals of the Europa League.

West Ham produced a superb performance to win 3-0 at Lyon on Thursday and book their first European semi-final since 1976, with the Hammers now set to face Eintracht Frankfurt for a place in the Europa League final.

Craig Dawson, Declan Rice and Jarrod Bowen scored the goals as West Ham’s impressive run in the Europa League continued into the last four and Moyes has now urged his side to believe that they can win the competition.

“I’m immensely proud of the players and the performance and probably more so, when you look back, of the performance in the second-half at the London Stadium last week when we were down to 10 men, which looked a really poor decision,” Moyes told BT Sport.

“The players stuck at it, never gave up, got a goal in front before we conceded. I don’t think anyone, when they were putting questions to me earlier, thought we were going to make it tonight.

“We have a really great group of lads, I’m lucky. They have been great in the time I have been here and the journey in two years from trying to avoid relegation and now we are talking about getting to the semi-final of a major European tournament. It is fabulous and we are all going to look forward to it.

“It is huge what we have done in two years. We have not won any trophies yet but we are trying to compete and to qualify for European football again, if we can.

“To be getting to these latter stages, we have beaten Seville and Lyon now since getting through the group stages, big clubs that are used to European football.

“But we go again, you don’t win anything for tonight but it was a big moment for us. Winning 3-0 away from home in Europe – a really good result.”

Moyes insisted his side were not favourites for the Europa League as the club chase a first major trophy in four decades, but says he wants his side to believe in themselves as they pursue European success this season.

“We’re not favourites, but I want the players to think that they are

“I want the players to create self belief… and I thought with the form we were in at the start of the season, I would’ve taken on anybody on at that time.

“But the season changes, we have injuries and tonight, we had a makeshift backline. Three boys who would be considered to start weren’t starting tonight.

“It was a great squad ethic and performance from them all that we could come here and get a result.”

West Ham will meet Frankfurt – who beat Barcelona to reach the semi-finals – over two legs in the last four. Coincidentally, the Hammers faced the same opposition in their last European semi-final, winning 4-3 on aggregate to reach the 1976 European Cup Winners’ Cup Final.