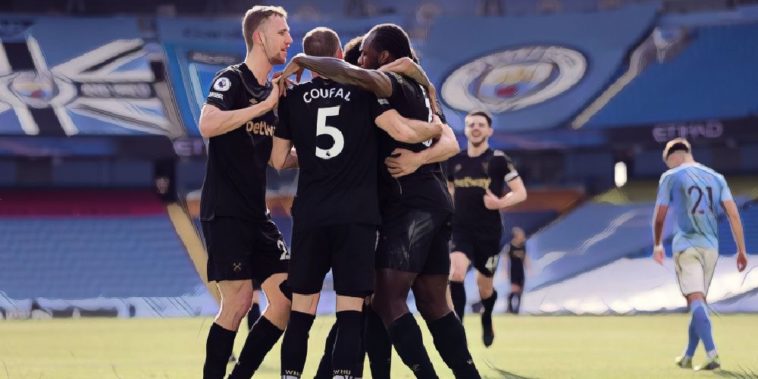 West Ham became the latest side to fail to slow Manchester City’s march towards the title as they slipped to a 2-1 loss at the Etihad.

The two sides came into the games as the two most in-form clubs in the division; Man City holding a 10 point advantage at the top of the table having won their last 19 successive games, while West Ham had made a charge into the top four.

West Ham looked content to sit back and try to hit the league leaders on the break, with Moyes’ side looking well drilled as they challenged City to break them down.

While they looked difficult to play through, City would find a way to take the lead after just half an hour. Kevin de Bruyne pinged an absolute beauty of a ball into the West Ham box with his apparently weaker left peg, the ball being met by Ruben Dias at the back post as the Portuguese powered his header past Darren Randolph.

West Ham wasted a chance to equalise five minutes before the interval, Michail Antonio sending a shot wide of the post following a cross from Jesse Lingard. Just minutes later though and the Hammers did haul themselves level, Antonio making amends for his miss as he poked home at the back post after Lingard had scuffed an effort from a Coufal cross.

⚽ Michail Antonio is the second player this season to score home & away against Man City in the PL (after Liverpool’s Mohamed Salah). He’s the first West Ham player to do so v Man City in a league campaign since Iain Dowie in 1995-96 pic.twitter.com/6XDr7p9Z2t

City came out with a bit more intensity after the break, and regained the lead in the 68th minute, Riyad Mahrez taking on his man down the right, cutting the ball back into box before it was swept home by the unlikely figure of John Stones, the Barnsley Beckenbauer enjoying a rich vein of goalscoring form since the New Year.

West Ham were unable to create too much in the second half as City had far more control, though the Hammers did squander a 94th minute chance to draw level once more, an Issa Diop header drifting wide and just out of the reach of Tomas Soucek at the back post.

Speaking afterwards, David Moyes felt his side deserved to come away with at least a point.

“It is disappointing because I thought the players did a great job and I thought we played well today,” he told West Ham TV.

“We did well with the ball, we defended well and we were organised well when we had to be and we didn’t give away too many chances to Manchester City throughout the game.

“We created one or two chances ourselves but the biggest one came in the last seconds to Issa and we didn’t take it.

“We’ve been doing that quite a lot this season, picking up wins and coming from behind and getting something and we were really unfortunate not to do so today.”

The former Everton boss was also disappointed by the manner of City’s two goals: “I was disappointed with both goals we conceded, to be honest,” he added.

“For the first one, the ball travelled too long without us getting the first contact on the header or the goalkeeper coming and claiming it, so I was disappointed.

Another eye-catching performance against a top side. 👏 pic.twitter.com/oWZeRP2ZXJ

“But I was delighted with the way we got ourselves back in the game and went in at half-time level at one-each as that put us in a really good position.”

Moyes said he hoped that his side’s all-round performance would, however, give them the ‘confidence’ to push on in the pursuit of a place in next season’s Champions League.

“I’ve been saying that I don’t really feel like we’re a team that is ready to be a top four club yet and there are better teams than us but, if we play like that between now and the end of the season, we’ll give ourselves a great chance,” he said.

“We’ve played against the best team in the Premier League today and we’ve played really well and made the game tough for them.

“So, I hope the confidence we take from parts of the game we can take into games between now and the end of the season.”

Next up for the Hammers is a home game against Marcelo Bielsa’s Leeds, before they return to Manchester to take on Moyes’ former side, Manchester United.