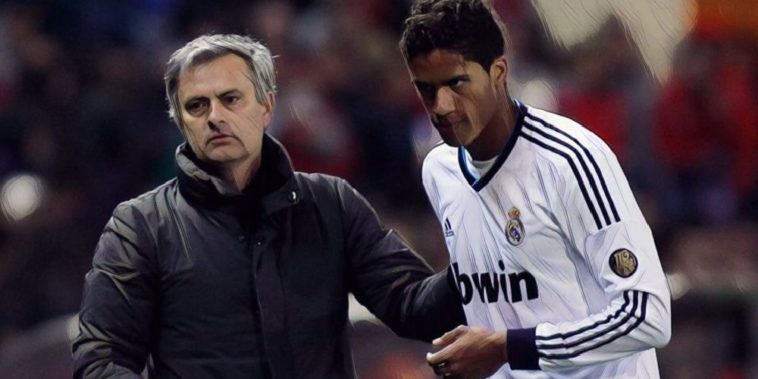 Jose Mourinho is interested in a reunion with Real Madrid defender Raphael Varane with Tottenham preparing a club-record £68m bid for the defender.

Mourinho signed a teenage Varane during his time as Real Madrid manager, handing the youngster his opportunity at the Bernabeu and later seeing the centre-back flourish into one of the world’s finest defenders, winning several major honours including four Champions League titles.

The Spurs boss remains a huge fan of the player and is now said to be considering an ambitious move to bring Varane to the Premier League, with El Desmarque reporting that the North London side are eyeing a big-money move for the 26-year-old.

Mourinho was previously interested in signing Varane during his time at Manchester United, though the Old Trafford outfit were unable to conclude a deal and ultimately signed Eric Bailly from Villarreal as an alternative.

The 56-year-old will now make another attempt to persuade the Frenchman to move to English football, with suggestions that Varane could be interested in the switch as he seeks a new challenge after eight seasons in the Spanish capital, the former Lens defender said to be attracted by the prospect of playing in the Premier League.

Spurs are likely to find it difficult to prise the player away from Zinedine Zidane’s side, however, chairman Daniel Levy is prepared to sanction a £68m deal that would surpass the club-record fee paid for Tanguy Ndombele last summer.

Whether that fee is sufficient to persuade Madrid to part with Varane remains to be seen, the 13-times European champions likely to want a world-record fee for a player who was part of the France side that won the World Cup in 2018.