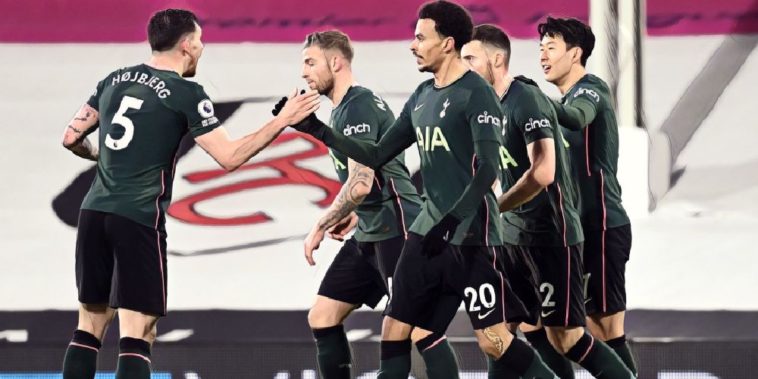 Tottenham Hotspur continued their mini-revival as they were made to work for a 1-0 win over relegation-threatened, Fulham.

The North London side were ruthless in front of goal against Burnley at the weekend, and many punters would have put their money on Harry Kane to open the scoring in the 17th minute. The England skipper found himself virtually unmarked just six yards out as son Heung-Min crossed the ball, though Kane’s tame header went straight at Alphonse Areola.

Spurs would, however, take the lead just two minutes later, Gareth Bale feeding the ball from deep into the recalled Dele Alli who moved it out wide to Son. The South Korean played it back across the box, and while Alli’s flicked effort was drifting wide, it took a small touch off defender Tosin Adarabioyo which was enough to see it trickle into the bottom corner.

Fulham had a number of chances throughout the game, particularly in the second half where they were largely the better side, and just after the hour mark they thought they had the equaliser that their play had deserved, Josh Maja firing the ball into the bottom corner, only for VAR to somewhat harshly rule it out for a handball in the buildup, Davinson Sanchez’s clearance striking Mario Lemina from close range.

The West Londoners continued to dominate, while Kane squandered a chance to double Spurs advantage, the 27-year-old again denied by Areola from close range with just eight minutes to play.

They would however hold for the win which would move them to within four points of the top-four and speaking afterwards, Jose Mourinho said he always knew it was going to be a challenging fixture.

“It was a tough game and we knew it,” Mourinho told BBC Sport. “They play very well, they don’t score many but they don’t concede many either.

“We had chances to kill it and we didn’t and then the game becomes very similar to what we have had in other games.”

There has been speculation that Hugo Lloris could leave the club this coming summer, though the Portuguese was keen to back his number one after he made three important saves during the game.

The result edges Spurs closer to the top four places having looked well adrift at one stage, though Mourinho is only looking towards Sunday evening’s game against Crystal Palace who held an underwhelming Manchester United to a 0-0 draw on Wednesday.

“I am expecting a battle with Crystal Palace, that is the battle I am expecting, they will be very hard. One more day for them to rest than us, it is going to be hard and it is the only match in this moment.”

Fantasy Premier League: Four of the best captains for gameweek 27