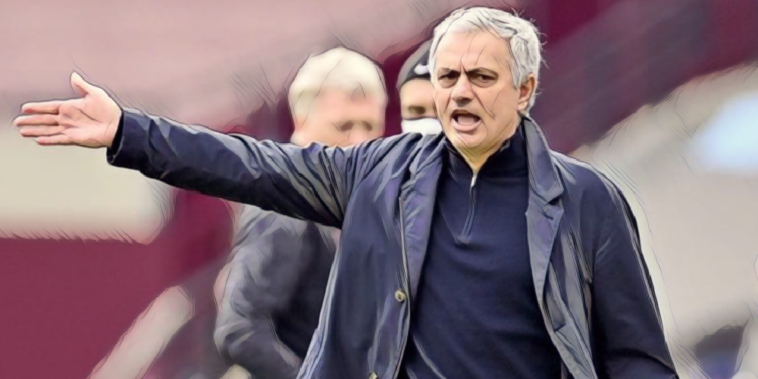 Jose Mourinho has admitted that it will be incredibly difficult for Tottenham to make it into the top four, after they suffered a 2-1 defeat away to West Ham on Sunday.

Spurs went into the game having lost fou rof their last five Premier League games, a run of form that has seen them slide out of European contention.

While Mourinho’s men were hoping to put things right at the London Stadium, it didn’t take long for David Moyes’ side to take the lead, winger Jarrod Bowen whipping in a delightful ball for Michail Antonio, the striker firing home after his initial effort had been saved by Hugo Lloris.

The visitors struggled to really get going in the first-half, with a rare chance seeing Harry Kane’s drilled effort well saved by Lukasz Fabianski.

With the away side trailing at the break, Jose Mourinho brought on Gareth Bale at half-time, yet just a few minutes after the interval, West Ham extended their lead, on-loan Manchester United man Jesse Lingard firing home is third goal for his new club with an excellent left-footed strike.

The introduction of Bale did provide an extra threat for Spurs, however, with the Welshman’s corner on 64 minutes finding Lucas Moura in the box, who headed home brilliantly to give his side hope.

With the Hammers hanging on, Kane then saw his drilled cross superbly defended by Declan Rice, before Bale’s stunning strike ricocheted off the crossbar.

The visitors then thought they’d snatched a point in the 92nd minute, the ball rebounding off Heung-Min Son and agonisingly striking the post, with the home side hanging on to give Moyes his first Premier League win over counterpart Mourinho.

As for the Portuguese, he was clearly disappointed by another setback, although he insisted that his side were ‘trying absolutely everything’ to score and saying ‘the result should have been a different one’.

“I feel sad, obviously,” he told Sky Sports. “I feel the result should have been a different one from what we played especially in the second half. That is my feeling and a little bit of deja vu. Their defensive line was brilliant. Their centre-backs gave us a very difficult match. We started the game with a mistake and started the second half with another one.

81 – José Mourinho has earned 81 points after 50 league matches in charge of Spurs, his lowest total at this stage in any managerial stint:

“The team in the second half was trying absolutely everything. We had the chances, hitting the post, great crosses across the face of goal. We had easy shooting positions to score so we should have scored more goals.

“I have spoke about this for such a long time and it is not always good to stay on the same page. I believe people who watched the game understood completely the nature of the goals we conceded.

“They fought, this is not a criticism it is to praise their spirit. They fought, they fought hard but they just fought. We were the team that tried to play but the boys were not lucky.”

One bright spark was the performance of substitute Gareth Bale, the on-loan Real Madrid man laying on the assist for the goal and almost scoring a sensational volley in what was a lively 45 minute display.

It’s not exactly been the smoothest return to the club for the 31-year-old, although Mourinho praised the winger’s ‘quality’ and stated that he hopes he can get back to full fitness.

“I know his quality. I cannot say everything to you, I shouldn’t. I don’t want,” he said of the Welshman. “I believe as a coach I don’t have to speak so much about the situation but with a Gareth Bale completely fit and ready to play 90 minutes of every game of course he would. We are trying everything with him to recover him to be at a good level. To play 65 minutes like he did Thursday then today he couldn’t start the game today, he wouldn’t have 90 minutes to give us but I am happy because we know what he brings, he brings his quality. Very unlucky shot because in that situation we had a double shot to score but we didn’t.”

The defeat has left Spurs in ninth and nine points behind Sunday’s opponents, with Mourinho describing his side’s chances of clinching a top four spot, ‘very difficult’.

West Ham are closer to being in the race for 2nd place than Spurs are for Top Four 💀 pic.twitter.com/AUCkTWk0oO

“Before the game I was not looking to the table I was looking to the game and the objective was to win and when you win you look to the table to see where you are. It is very difficult to think about the top four, the top four, five six teams are getting points. It will be very, very hard, the Europa League is a great motivation to get a Champions League spot and a trophy at the same time.

“The boys fight and when the team fights you can believe good things can happen.”

Spurs are next in action against Wolfsberger in the Europa League on Wednesday, before they host Burnley in the Premier League on Sunday.