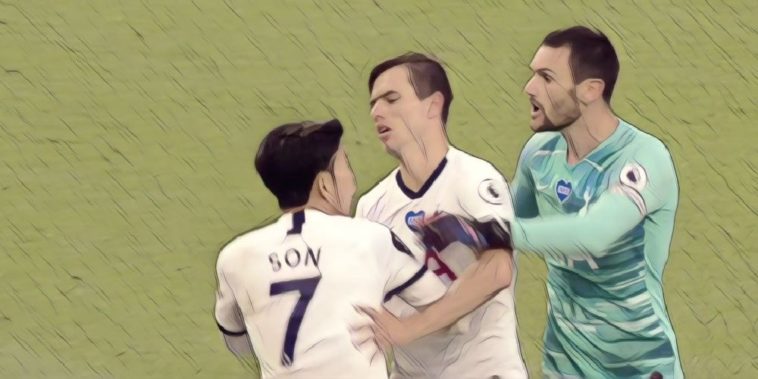 Jose Mourinho described the sight of two of his player arguing as ‘beautiful’ after Tottenham Hotspur edged to a 1-0 over Everton on a scrappy night in North London.

Both sides came into the game harbouring faint hopes of European football, though on this showing, neither probably deserve it.

Spurs were marginally the better side in the first period and took the lead through a scrappy own goal, Giovani Lo Celso’s strike taking a huge deflection off of Michael Keane, with the ball sailing past a helpless Jordan Pickford.

Everton did manage to muster a few chances late in the second half, though nothing that particularly troubled Hugo Lloris in the Spurs goal.

One of the more marginally interesting things to happen over the 90 minutes was a half time disagreement between Lloris and teammate Heung min Son as they left the pitch, the Spurs captain unhappy with the South Korean’s defensive workrate at times, though the ‘keeper insisted it was nothing more than standard dressing room handbags.

“It just belongs to the changing room – outside you can say whatever you want,” Lloris told Sky Sports. “What happened between me and Sonny is part of football sometimes. There’s no problem. At the end of the game you could see we were more than happy.”

Jose Mourinho had criticised his side’s fight in their 3-1 loss to Sheffield United last week, and the Portuguese reckoned it was ‘beautiful’ to see his side demanding more from each other.

“It’s beautiful,” Mourinho told Sky. “It’s probably as a consequence of our meetings. If you want to blame someone for that it’s me. I was critical of my boys – they were not critical enough with themselves. I asked them to be more demanding of each other.

“Son is an amazing kid, everybody likes Son but the captain told him you have to do more and give more to the team.

“It’s something needed for the team to grow up – to grow up you need big personalities. When you have that reaction I had no doubts.”

The win was the 200th Premier League win of Jose Mourinho’s managerial career, and the Portuguese was pleased with his sides control in a less than ‘artistic’ display.

“It was not an artistic performance,” he added.

“Hugo didn’t have to make great saves. Richarlison and Calvert-Lewin are a couple of the best strikers in England and we controlled them very well.

“We were speaking a lot about our attitude. The way we played against Sheffield United, someone in front who doesn’t know we are fighting for a European place probably thinks we’re a mid-table team.

“Today we tried to score more goals and we had a couple of chances with Son that could have killed the game.”