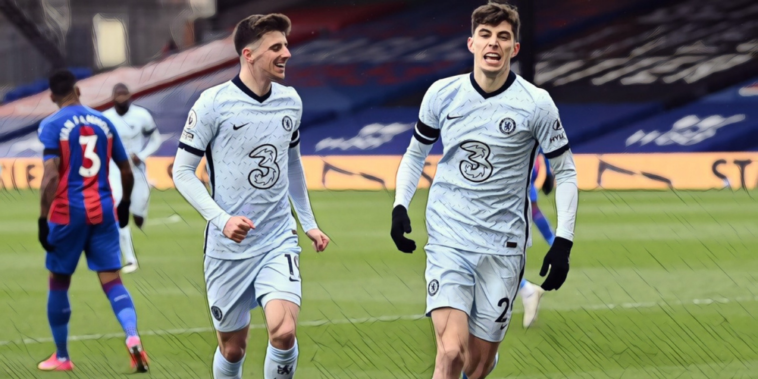 Mason Mount believes Chelsea’s slick attacking showing against Crystal Palace has been ‘brewing’ for a while following the club’s comprehensive win at Selhurst Park.

Chelsea continued their push for a top-four finish and Champions League qualification this weekend with a resounding win against Crystal Palace, Christian Pulisic scoring twice in a 4-1 win against the Eagles.

Thomas Tuchel’s side raced into a two-goal lead within the opening 10 minutes courtesy of Kai Havertz and Pulisic, the former enjoying arguably his best performance in a Chelsea shirt since signing in a club-record deal from Bayer Leverkusen.

It was an encouraging performance from the west Londoners as Havertz linked superbly with the likes of Mount and Pulisic, the trio enjoying some fine moments with clever intricate passing and relentless attacking pressure.

Mount admits his side were pleased to see their forward ‘combinations’ pay off in an impressive attacking performance from the Blues, insisting the club’s ruthless display in front of goal has been ‘brewing’ for a while.

“I don’t think it has come together like that since our first game together,” Mount told chelseafc.com.

“It was always coming; it was always brewing. We started off very sharp. At the top of the pitch our combinations were good, we were creating chances and we took them. That’s something we probably haven’t been doing as much recently.

“We know we have a lot of quality in the team. When we’re on it and we’re creating chances we can score a lot of goals. It hadn’t happened like that but it has now and that’s great for us.

“We came into the game with a lot of confidence after Porto knowing what we can do. As a team we felt very strong. We know what is on the line. We’re still in three competitions so every game is so important.”

Chelsea next face Porto in the second leg of their Champions League quarter-final tie, the Blues holding a 2-0 advantage from the first meeting in Portugal.