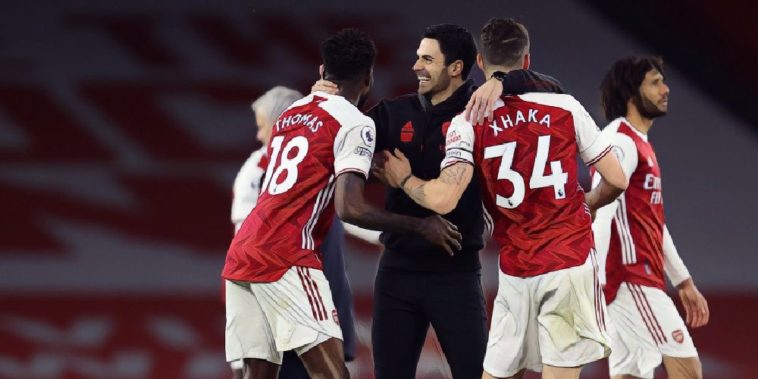 Arsenal claimed their first North London derby win since 2018, coming from behind to beat their great rivals, Spurs, 2-1 at the Emirates.

The game quickly settled into a pattern of early Gunners possession, Spurs looking happy to sit back and keep it tight, just as they did in the 2-0 win in December when they expertly utilised the counter-attack.

Emile Smith Rowe almost opened the scoring with a cracking effort from distance in the 15th minute, the Arsenal academy graduate beating Hugo Lloris but seeing his effort crash back off the bar.

After weathering the early pressure, Spurs finally started to see a bit of the ball, and with their first shot of the game in the 33rd minute, Jose Mourinho’s side would take the lead through a superb improvised finish from Erik Lamela. The Argentine – brought on for the injured Heung Min Son – had been busy in the buildup, and having received the ball from Lucas Moura, Lamela produced an exquisite Rabonna finish into the bottom right corner which nutmegged Thomas Partey on the way.

Arsenal got back on top in terms of possession, and would get themselves level on terms with their first shot on goal, Kieran Tierney getting forward down the left, cutting the ball back to Martin Odegaard who followed up his thunderous strike against Olympiakos in midweek to draw his side level, his effort taking a deflection on the way past Lloris.

Arsenal would be afforded the chance to take the lead just after the hour mark, Davinson Sanchez flying in to try block an Alexandre Lacazette effort, only to catch the Frenchman on his way through, before the number nine stepped up and rolled the resulting penalty past the Spurs captain.

Having lit up the first half with a moment of magic, Erik Lamela was sent for an early bath, an accumulation of fouls seeing him pick up two yellow cards in the space of seven minutes to leave his side with an uphill battle.

45 – Spurs have dropped 45 points from winning positions against Arsenal in the Premier League, the most of any team against a specific opponent in the competition. Spursy. pic.twitter.com/oox4iuErKx

The sending off seemed to spark Spurs into life, however, and after having a relatively quiet afternoon, Harry Kane did manage to find the back of the net with seven minutes to play following a free-kick from the right, only to see it chalked off after making his run towards the back post fractionally too early. The Spurs striker also saw an 89th minute free-kick come back off the post as the visitors fruitlessly looked to salvage a point.

Speaking after the game, Arsenal boss Mikel Arteta said was understandably delighted to see his side come from behind to claim three points.

“Full credit for the way we have done it today after two days coming back from Europe,” he told Sky Sports. “It was incredible. Going 1-0 down the way we were playing was disappointing and worst-case scenario against a team like Spurs. But we kept playing and deserve the win.

“Last 10 minutes we did not manage the game and we need to improve on as a team. We relied on luck. With the way we played, we should have seen it out comfortably.

“We prepare the game trying to exploit areas. We had some really strong performances today. You could see the energy they were playing with.

“It is about how you react. This team have the reaction in them to not give up. We kept playing and generating chances and got rewarded. We play quite well in the previous derbies but they are so efficient. They don’t need much to score. You see with Lamela today. A quality goal.”

Next up for Arsenal is the second leg of their Europa League last 16 tie against Olympiakos.