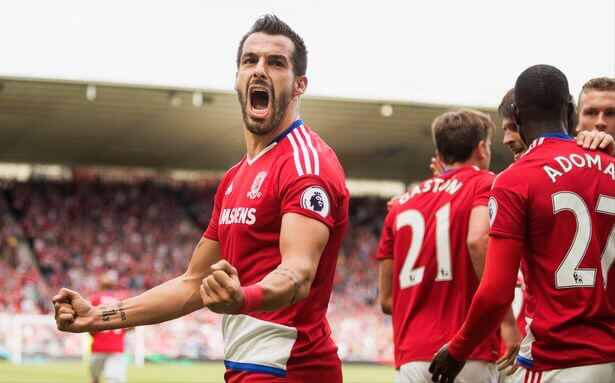 At long last it has been confirmed that Boro will be playing in the Championship next season.

A long summer awaits that will doubtless hold many changes for the football club, but nowhere is it more needed than in the playing staff. In this article, I will go over the players who aren’t good enough to remain at the club and the players that we should look to cash in on.

Starting with the goalkeepers, it has already been confirmed that Brad Guzan is on his way to the MLS. Victor Valdes should follow him out of the door, with high wages and no doubt higher ambitions than the Championship.

That leaves a now aging Dimi Konstantopoulos who should be kept around as a third choice. I’ve already mentioned previously that I’d like Connor Ripley to make the step up and challenge for the #1 shirt, so that adds one goalkeeper to the shopping list.

At the back, Boro are set to lose successful loan signing Calum Chambers, whilst star centre back Ben Gibson will surely be an asset that Boro are forced to cash in on this summer. As much as I’d like to see him stay, an offer of 25m+ would be impossible to turn down.

As for other sales, I think it is vitally important that Antonio Barragan is off-loaded (for free, if necessary), as he is a defensive liability with no redeeming attacking qualities.

This leaves a threadbare defence with Fabio, George Friend, and James Husband as the only recognised full backs and Bernardo Espinosa, Dani Ayala and the young Dael Fry as the only central defenders.

Much investment is needed here to rebuild what used to be the best defence in English football.

The central midfield is not a crisis area for the club. Club stalwart Grant Leadbitter is out of contract, and is probably at an age now where renewing it would be poor business, leaving a central midfield quartet of Adam Clayton, Adam Forshaw, Marten De Roon and Adlene Guedioura.

Of the four, Adam Clayton is the one player who would be first on the team sheet for me next year, as a superb Championship defensive midfielder.

Forshaw has flattered to deceive, showing that he is terrified of both passing forwards and shooting, but is likely to still be around next year.

Marten De Roon will no doubt have done enough to attract some interest, and if Boro can recoup anywhere near the £12m spent on him in the summer then they should do.

That leaves Guedioura, a Championship standard player who likes to get forward, and who might have a role to play. Regardless, Boro’s central midfield needs an injection of creativity and forward thinking.

Moving further along we have Boro’s attacking midfielders. Stewart Downing has been an expensive, anonymous flop in his second stint at Boro, and should be moved on at the soonest convenience. Enough has been said of Gaston Ramirez; he will be gone, thankfully.

Adama Traore continues to divide opinion, but in my mind, he would be better off taking up a career in athletics, as he is a better 100m sprinter than he is a footballer. If Boro can attract offers for him, take them.

I’d like to see Viktor Fischer involved next year; you don’t come through Ajax’s academy and end up a bad footballer. The Championship could be where the Dane starts to shine.

This area of the pitch however must be where Boro put their focus. Harry Chapman and Callum Cooke certainly have a part to play here, but we need two wingers, one for either side, with pace and a good cross.

We need a number ten who can consistently link the midfield and attack, and provide some much-needed creativity in the team. This was the area we failed to reinforce in January, and ultimately is where we were found wanting.

Finally, we come to the strikers, another position where I don’t believe there to be a crisis.

Alvaro Negredo will go back to Valencia with my blessing, having put in a superb shift for us this year, leaving Patrick Bamford and Rudy Gestede, January’s much-maligned signings, to lead the line.

Bamford has shown he can do it in this league for Boro before, and even Gestede has been a success.

Equally, we might finally see Cristhian Stuani be given a chance to play up top, meaning we’ve got three decent Championship strikers to choose from. Not a problem area.

Overall then it’s a long shopping list. A keeper, a centre back, two full backs, a central midfielder, two wingers and an attacking midfielder. At least seven or eight players.

Over to you Gibbo.

Do you agree with this list? What players would you suggest that Middlesbrough target? Can the Boro return to the Premier League at the first attempt? Leave us a comment below