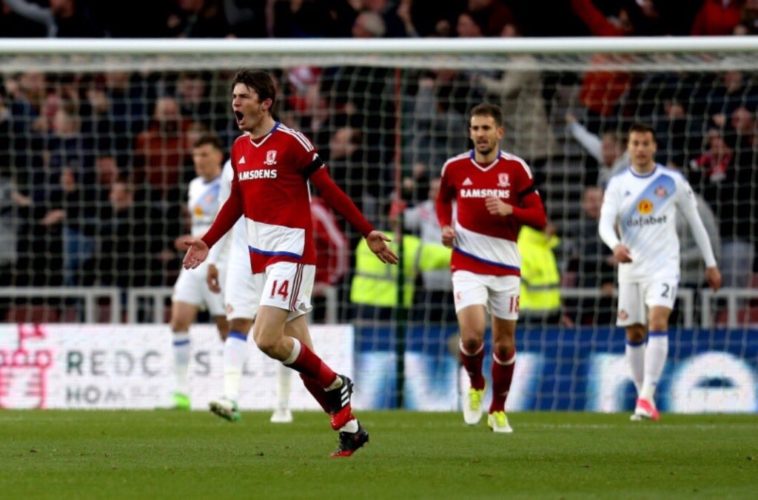 Boro finally ended a 16 match winless run and completed a derby-double with a 1-0 victory over Sunderland.

In a game which is perhaps the least anticipated derby of all time, Boro won what might be some of the most meaningless three points in Premier League history.

Lacking in quality, determination and fight, the game will not go down as a classic by any stretch of the imagination. Instead, it was a stark reminder as to why Sunderland and Middlesbrough make up the bottom two places in the table. Make no mistake, these two teams will be relegated, and based on this showing, it is utterly deserved.

For the first 5 minutes Sunderland started with zip and confidence, but – against the run of play – it was Boro who took the lead on the 8th minute through Marten De Roon. The only central midfielder in the Boro side with the permission, or perhaps bravery, to make a forward run, De Roon latched onto a long ball from Adam Clayton and controlled cleverly with his chest. Getting between the Sunderland defenders, he poked it past Jordan Pickford in goal and injected into the game perhaps the single moment of quality present.

Shortly after, it should have been two. Stewart Downing broke free past some comical Sunderland defending, but the hapless winger fired low and limp straight at the goalkeeper.

They were the only two clear cut chances in the whole match; a free kick from Wahbi Khazri midway through the second half was all that Brad Guzan had to deal with in the Middlesbrough goal. Boro themselves did their very best to make sure they didn’t do the unthinkable and try to score any more goals.

Sunderland perked up in the second half, in the sense that they actually began to try, and it is fair to say that Middlesbrough were terrified at the prospect. Fortunately for the Boro players, they have managed to find the one team in the Premier League that are worse than they are. Sunderland’s lack of quality was obvious throughout.

Despite that, Boro still sat so deep they practically fell off the pitch, offering absolutely nada, zilch and squat in attack. Instead, the Boro seemed  content to let Sunderland’s bumbling attacks bounce past them and into Guzan’s untroubled hands.

From hopeful long balls to shamefully poor crosses, it’s truly difficult to find anything positive to say about either team’s performance. Both sides consist of players who do not believe they can win football matches. They lack composure, they do not string passes together, they do not want to get on the ball and play forward and look to open up the game.

In the end, both sets of fans will be going home unsatisfied, and desperate for the season to finally end.

Boro’s next final four fixtures offer little hope, with trips to Chelsea and Liverpool and home games against Manchester City and Southampton. These may be the last points Boro acquire in the Premier League for a long time.