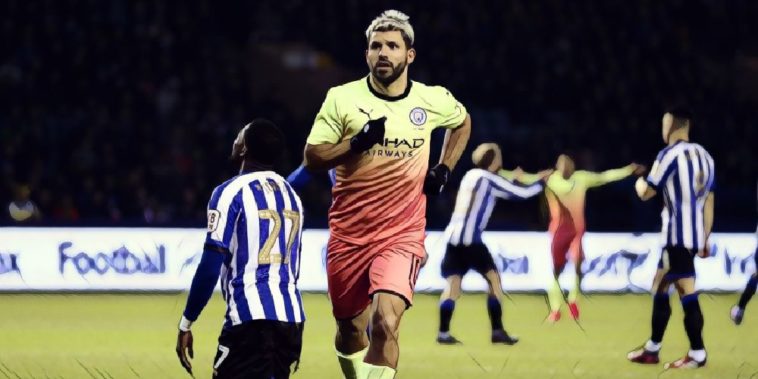 Aguero scored the only goal of the game as the holders sealed their progress to the last eight at Hillsborough, firing home from Benjamin Mendy’s fine pass to book Man City‘s place in the quarter-finals.

The Premier League champions had previously been frustrated in their attempts to break down a stubborn Wednesday rearguard, Mendy and Nicolas Otamendi both hitting the crossbar for Guardiola’s side with the game goalless.

Their breakthrough would come from top scorer Aguero early into the second half, though the Argentine’s winner was not enough to escape criticism from Guardiola who berated the 31-year-old upon his substitution for Raheem Sterling.

Aguero has shrugged off Guardiola’s reaction, however, admitting the Spaniard can be ‘crazy’ when attempting to demonstrate his tactical advice.

“He said when Riyad or Bernardo receive the ball just to move in behind the centre backs,” Aguero told BT Sport.

Guardiola responded to the forward’s version of events post-match, finding the funny side of Aguero’s comments.

“I substituted him for Raz to make movements into the space,” he said in his post match press conference. “I like to be crazy and a good manager!”

City next return to Premier League action when they make the short trip to Old Trafford to face rivals Manchester United on Sunday.