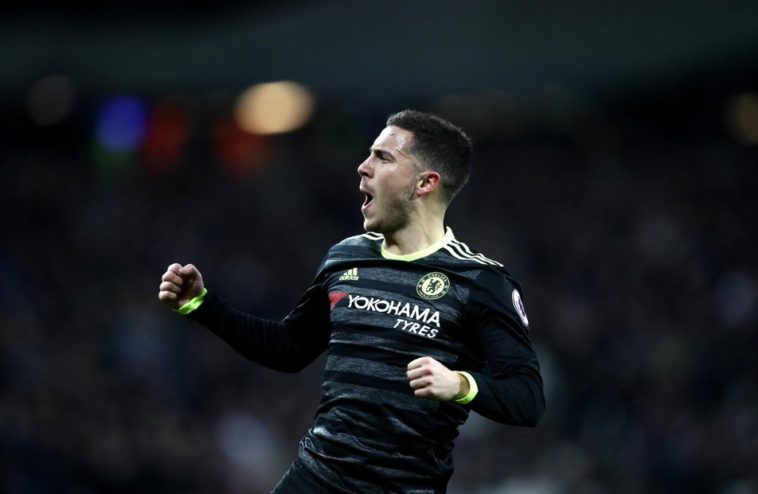 Chelsea cruised to a routine win over a disappointing West Ham at the London Stadium on Monday to extend their lead at the top of the Premier League.

Goals from Eden Hazard and Diego Costa gave the visitors a 2-0 advantage before a late strike from Manuel Lanzini made the final score 2-1 to Chelsea.

West Ham came into the game high on confidence, having lost only once in their last six Premier League matches. They also beat Chelsea earlier this season at the London Stadium in the EFL Cup.

Andy Carroll was back after a few weeks out with a groin injury and he was expected to give the Chelsea defence a torrid evening. Instead, David Luiz and Tim Cahill coped admirably with his aerial threat, as the Hammers put numerous high balls into the box, during the first 20 minutes of the match.

After a fairly even opening period, Chelsea took the game by the scruff of the neck on 25 minutes. A West Ham attack was broken down by the ever energetic N’Golo Kante deep in Chelsea’s half, and the visitors attacked quickly. A neat one-two between Pedro and Hazard resulted in the latter slotting the ball past goalkeeper Darren Randolph.

Early in the second half Chelsea doubled their lead when a 50th minute corner was chested over the line by Costa – the Spanish strikers 17th league goal of the season.

It was a soft goal for West Ham to concede, as no defender got near the ball as it was floated into the goalmouth. Randolph completely missed the flight of the ball as it drifted over his head and onto Costa, who just had to let it hit him to score.

For the last half an hour of the game Chelsea shut-up shop and looked defensively solid. West Ham repeatedly tried, to no avail, to play through a very congested midfield. Usually the home side were reduced to playing sideways and even backwards, as they kept possession without ever penetrating the visitors defence.

Sofiane Feghouli came close with a low drive, which was well saved by Chelsea keeper Thibaut Courtois. Then, deep into added time Lanzini collected a pass from substitute Andre Ayew and fired home a goal for West Ham.

Unfortunately for the Hammers, it was too late to change the outcome of the match, as there was very little time for West Ham to even mount another attack.

The victory means that Chelsea are now 10 points clear at the top of the table and look like winning the Premier League title in manager Antonio Conte’s first season in charge.

West Ham remain in 11th position in the league and a mid-table finish looks to be the best they can achieve. The Hammers travel to Bournemouth this coming Saturday and hopes are still high that they can replicate last season’s 3-1 win on the south coast.