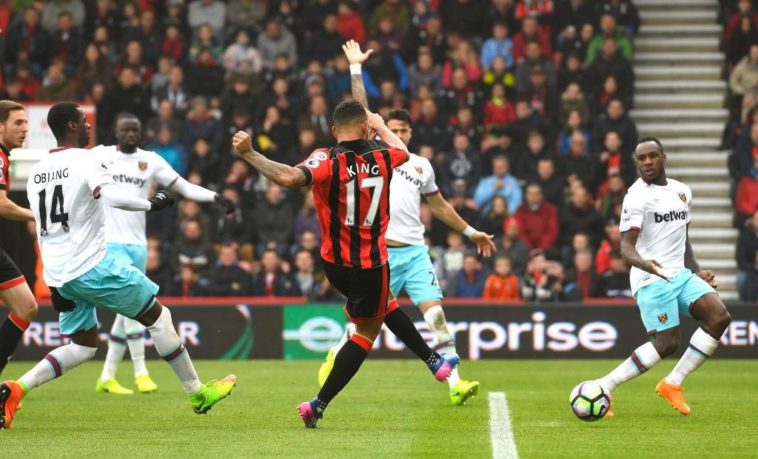 A late goal by Joshua King secured all three points for Bournemouth and denied West Ham the point they probably deserved from this game.

The 90th minute winner was King’s third goal of the afternoon and rounded off an eventful day for the Bournemouth striker as he also missed a first half penalty.

That miss could have come back to haunt the hosts, as two minutes later West Ham took the lead, through a 10th minute strike from Michail Antonio.

Bournemouth, however, seized the initiative after falling behind, and they were even awarded another penalty when Marc Pugh was fouled in the box. This time, Benik Afobe stepped up to take the spot kick, only to see his effort easily saved by Hammer’s keeper Darren Randolph.

Just after the half hour mark the hosts were level when King hooked the ball over Jose Fonte’s head and volleyed home the equaliser.

King’s good fortune continued when he gave Bournemouth a 2-1 lead soon after half time. Some neat play by the hosts ended with King firing home from close range.

From here onwards the second half opened up, as Bournemouth looked for a third goal to seal the victory, while the Hammers chased for an equaliser.

With seven minutes remaining, West Ham looked like they had secured at least a point when substitute Andre Ayew scored to make it 2-2.

This was Ayew’s third goal for the Hammers, and his second in three games. Coming off the bench to grab an equalising goal is becoming his trademark, having done the same thing at Watford two weeks ago.

Unfortunately for the visitors, there was still time for Bournemouth to score a winning goal. The introduction of Jack Wilshere had added some much needed urgency to the home side’s attacks, and he was heavily involved in the build-up to the winning goal.

The ball was played across the West Ham penalty area, and with the Hammers defence ball-watching, King slammed the ball into the roof of the net to secure all three points for Bournemouth.

The win moves Bournemouth six points clear of the relegation zone, in 14th place in the Premier League.

West Ham, after two defeats in a week, remain in 11th spot and must now turn their attention to next Saturday’s match at home to Leicester City.

Football Faithful are looking for writers to regularly write for us about AFC Bournemouth. If you are interested please register your interest now