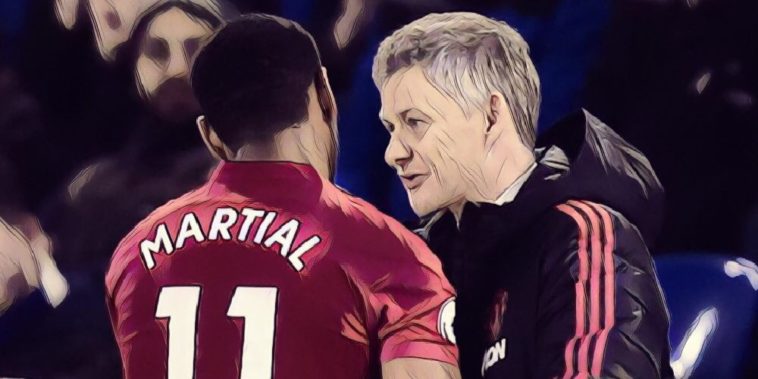 Fresh after committing his long-term future to the club, Anthony Martial has been singing the praises of Manchester United interim manager Ole Gunnar Solskjaer.

Just a few months ago, Martial’s future looked firmly away from Old Trafford, with the Frenchman enduring a strained relationship with Jose Mourinho.

However, Mourinho was replaced by club legend Ole Gunnar Solskjaer in December, after Manchester United had picked up just 26 points from their opening 17 games, with this reign coming to an end after a miserable 3-1 defeat to Liverpool.

Under Solskjaer however, the Red Devils have been transformed into the most in-form team in Europe, picking up 22 points in just eight games under the Norwegian’s tenure.

Solskjaer’s arrival has brought a feel-good factor back to the Old Trafford faithful, and seemingly to the United squad, with Martial completing a total U-turn to sign a new five-and-a-half-year deal at the club, and now the Frenchman has spoken in glowing terms about the current caretaker boss.

“He is a coach with great values. I think he knows how to get the best out of players and he makes things clear so when we go out onto the field, we all know our jobs and we all know what we’ve got to do,” Martial told Sky Sports.

“He’s given me lots of advice. It’s always positive to get advice from a top player in his own right, but sometimes, when you’re out on the field, it comes down to what comes naturally to you and you do what you’ve always known how to do in terms of finishing.

“We have a laugh among ourselves quite often because I think finishing is something that comes naturally to me. I’ve played since I was a young kid, I’ve always been a footballer and a striker from that early age.

“The thing we laugh about is that I miss quite a few in training, whereas in a match, I may only get one chance and I manage to convert it.”