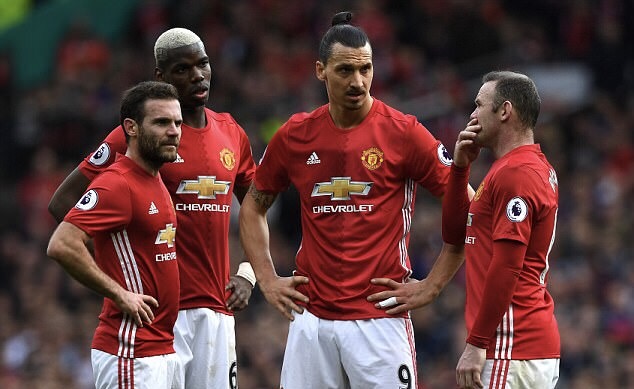 Manchester United are at serious risk of failing to qualify for the Champions League for a second consecutive season, after another goalless draw against West Brom on Saturday.

The red devils slipped five points behind Manchester City, but have a game in hand on their local rivals. They still have to face City in the Manchester derby on 27th April, but their lack of goals could be decisive on whether they qualify for the Champions League or not.

Jose Mourinho has relied heavily on top goal scorer Zlatan Ibrahimovic. The Swedish hero has scored more league goals than Wayne Rooney, Anthony Martial and Marcus Rashford combined. They’ve also failed to score in two out of the three games since the beginning of the Swedish striker’s suspension.

Where is the killer instinct?

Sir Alex Ferguson left such a legacy that other managers have failed to return the glory days to the Theatre of Dreams. David Moyes crumbled under the pressure. The reputable Louis Van Gaal was unable to replace United’s famous Scot. It seems if Jose Mourinho can’t find a quick fix either.

He’s made various changes to the players, style and formation, including a more defensive approach. This has benefitted them in terms of keeping clean sheets, but United’s lack of goals is becoming a serious concern.

Manchester United have maintained a consistent run of form and are currently enjoying a 19-match unbeaten run in the Premier League. However, they’ve drawn 11 matches this season. This is the joint-highest amount in the league this season and it’s not good enough.

Its especially not good enough when you look at the teams they have drawn against at home. Burnley, Bournemouth, West Brom, to name but a few.

They have improved defensively this season and only Tottenham Hotspur have conceded less goals than them in the Premier League this season. Despite this progress, all of the teams inside the top seven have scored 10 or more goals than Manchester United this season.

Paul Pogba became the most expensive footballer in the world when he signed for Manchester United in last summer’s transfer window for £89 million. Was he worth it? Statistically he’s struggled, yet Mourinho has persistently included the Frenchman in the starting line-up.

The 23-year-old has struggled in his returning season at Old Trafford and has come under strong criticism regarding his recent performances. It’s clear that the team under Mourinho’s guidance is currently a work in progress.

Zlatan Ibrahimovic is one of the biggest players in world football. Despite being 35-years-old, he still manages to perform at the highest level. The Swedish striker has won domestic titles in Italy, Spain and France in 9 out of the past 10 seasons.

The red devils suffered a massive set-back when Ibrahimovic received a three-match domestic ban. This was due to an incident, which took place in United’s 1-1 draw against Bournemouth in early March, in which he elbowed defender Tyrone Mings.

In this period, Manchester United have won only one of their games. They were knocked out of the FA Cup with a defeat against Chelsea at Stamford Bridge in the quarter-finals. They managed to beat struggling Middlesbrough before the international break before dropping more points against West Brom. United failed to score in two of the three games that Ibrahimovic was out for.

Ibrahimovic’s future at Old Trafford is also uncertain. It’s vital that United have enough quality to deal without him in the starting line-up whether he stays or goes.

Chances of Qualifying for the Champions League

Manchester United are currently five points behind fourth-place Manchester City and have some tough fixtures remaining. They still have to face Chelsea, Manchester City, Tottenham Hotspur and Arsenal before the end of the season.

They also have the contend with the extra games from the Europa League. Despite this being a hinderance, it could be their likeliest route back into the Champions League. They play Belgian team Anderlecht over two legs during April in the quarter-finals, a tie they are expected to win.

The return of Zlatan Ibrahimovic and Andre Herrera (also suspended) is going to be a huge boost for United. However, injuries to Phil Jones, Chris Smalling and Juan Mata could affect the team. The trip to the Etihad Stadium will be vital if Manchester United can maintain their unbeaten form until the 27 April.

Liverpool are one-point above Manchester City in third and United have two games in hand on their Scouse rivals. Jurgen Klopp’s teams’ form has improved in recent weeks and they will also don’t have to face any of the top six in their remaining games. They also don’t have any cup games to clutter up their fixture lists like United do.

Manchester City have a difficult trip to Stamford Bridge in their next match, and a defeat would seriously increase United’s chances of overtaking them in the race for Champions League football. But if Jose Mourinho and Manchester United want to qualify, they must start scoring, and quickly!

For a full run down of the top sevens remaining fixtures, please check out our article, Premier League: The Race for the Top Four.