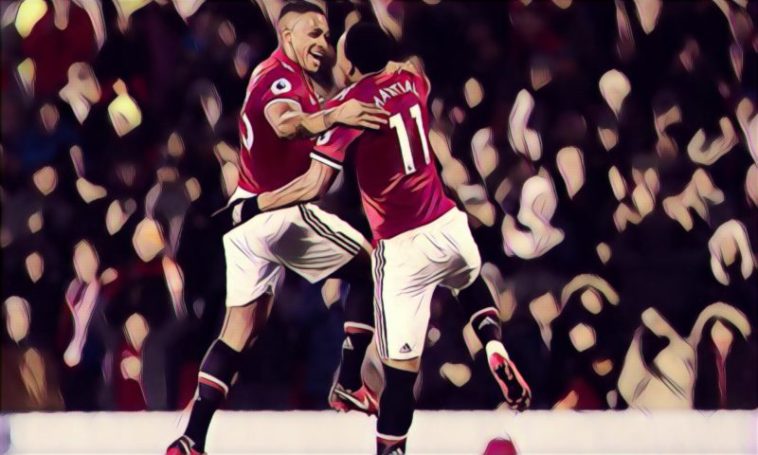 Manchester United swept aside Stoke City 3-0 at Old Trafford tonight to cement second place in the Premier League table. Let’s look at how the players rated …

Made a couple of decent stops. Will be happy to have kept yet another clean sheet this season.

Opened the scoring with a cracking left-football finish, and in general solid as houses as usual.

Dealt with the defensive side of things relatively easy, although he is so limited in possession.

Decent. Didn’t put a foot wrong all game and passed the ball well.

Kept Shaqiri quiet for the most part, but could have been a bit more positive on the ball on a few occassions.

The best player on the pitch, ran the show in midfield and notched his eight and ninth assists of the season, which makes him the leading goal creator in the Premier League.

Kept things ticking over nicely in the centre of the park.

Neat and tidy in possession as always, and got himself into some dangerous positions at times.

Has been in great form lately, but this was not the best of performances by the England international.

Showed superb technique to curl home United’s second and got himself an assist in the second-half to cap a fine display.

Took his goal well, and his hold-up play was really impressive throughout.

Nothing fancy, but kept possession well.

Made a couple of dangerous runs down the left late on.

Had no chance with any of the goals, but his distribution was sloppy at times.

A mixed bag. Lucky not to give away a penalty a few minutes into his Premier League debut, although he did show plenty of power and pace on a couple of occasions.

Poor. His sloppiness in possession almost cost his team at times.

Couldn’t deal with Lukaku all game.

Had a nightmare, at fault for the first two goals and hooked at half-time.

Struggled on his return to Old Trafford up against the brilliant Pogba.

Went close with one acrobatic effort in the first-half, but did little else.

Worked hard, although he was left chasing shadows at times.

Missed a couple of decent chances in the first-half. Did do plenty of good things however, especially when you consider it was his first Premier League start in three years.

Failed to make any real impact.

Missed a decent chance after his introduction.

Unable to create anything for his team.

Came on at half-time, and slightly improved things down the left for Stoke.