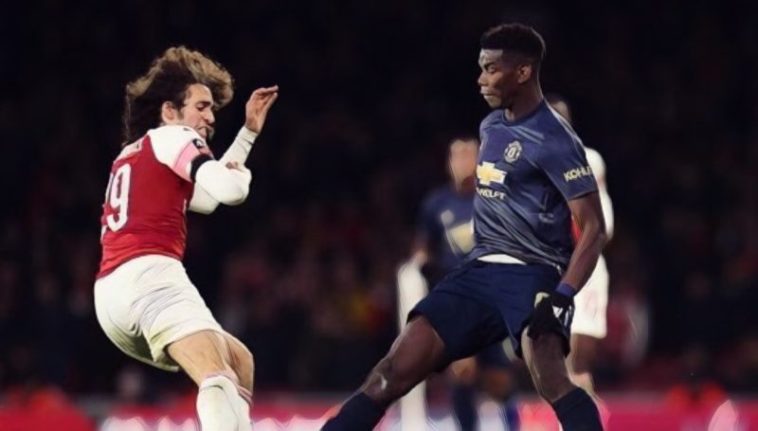 Arguably the greatest rivalry of the Premier League era, Manchester United and Arsenal were the dominant forces in English football for much of the nineties and early 2000’s.

The two grand old clubs have fallen somewhat since the days when they would regularly compete for the title, with both undergoing periods of transition following the ending of respective dynasties under Sir Alex Ferguson and Arsene Wenger.

Monday night will see the two rivals do battle once more, and ahead of the clash we’ve compiled the best players from both sides to make an ultimate combined XI.

A side that would once contain the likes of Thierry Henry, Roy Keane and Patrick Vieira looks a little different now…

De Gea’s status as the Premier League’s finest shot-stopper may be more debatable than it once was, the Spaniard uncharacteristically making more errors over the past year than previously seen in his eight seasons in English football.

That said, the 28-year-old is a justified inclusion in our team ahead of Arsenal counterpart Bernd Leno, his quality demonstrated by his five inclusions in the PFA Team of the Year. Named as United’s Player of the Year on four occasions, the club will hope he can rediscover his best form once again as they bid to close the gap to the leading sides in the division.

The highly-rated youngster was included in Gareth Southgate’s England squad for the first time for the recent Euro 2020 qualifiers, though will have to wait for his senior international debut after withdrawing through injury.

The 21-year-old’s inclusion was justified following his performances for Crystal Palace last season, which saw him named as the club’s Player of the Year and earned him a £50m move to Old Trafford.

Wan-Bissaka has impressed fleetingly in his first appearances for the club despite their indifferent form, and will hope to continue to cement his place as a key figure in Ole Gunnar Solskjaer’s backline over the coming months.

Once a much-maligned figure, the Sweden international has developed into a reliable performer since Solskjaer’s arrival as manager last season.

The 25-year-old’s composed performances saw him linked with a move to Barcelona, though after recently signing a new contract United obviously see him as the long-term partner to the world’s most expensive defender…

Having posted their worst defensive record of the Premier League era last season, United spent big on Leicester’s Harry Maguire in a bid to bolster their shaky backline. The record breaking £80m fee eclipsed the fee Liverpool paid for Virgil van Dijk to make Maguire the most expensive defender in history, though the 26-year-old is a proven talent at Premier League level.

Established as England’s leading central defender, ‘Slab-head’ is a formidable physical presence with a deceiving ability to easily bring the ball out from defence. Seen as a future leader of the club, he makes our team ahead of Arsenal’s calamitous defensive options.

Given that both teams have kept just one clean sheet each so far this season, defensive selection was somewhat of a headache for our team. Solidity remains a problem for both sides, though based on individual talent we’ve selected an all Manchester United backline.

Luke Shaw slots in at left-back ahead of Arsenal’s Sead Kolasinac, though summer signing Kieran Tierney could force his way into our side to boost the Gunner’s contingent following his return from injury.

Whilst Shaw has not quite reached the heights many expected when moving to Old Trafford as a teenager, he remains a talented full-back and his consistent performances last season were justified with the club’s Player of the Year award.

His goading of Watford fans prior to the club’s recent capitulation at Vicarage Road may have been ill-advised, but there has been no doubt that the youngster has made an impressive impact since moving to the Emirates last season.

Arguably one of the first names on Unai Emery’s team sheet, the 20-year-old plays with a maturity beyond his years in midfield and his £7m capture from Lorient looks like some of Arsenal’s better business in recent seasons.

Called up to the France squad for their recent Euro 2020 qualifiers, he is already in the thinking for Didier Deschamp’s world champions.

Easy on the eye, the on-loan midfielder has quickly become a fan’s favourite at the Emirates. He has impressed sporadically during his opening appearances for the club, but offers Unai Emery’s midfield a creative and influential option when at his very best.

At 23, the Spanish international has room for improvement, particularly given his lack of regular football whilst on the fringes of the Real Madrid team in the past two seasons.

Often playing his best football when dictating from a deeper position, Ceballos will likely be central to Arsenal’s better performances the season.

Few players command as much media attention as Manchester United’s divisive Frenchman, though for all his detractors he remains one of the finest midfield talents in the division when in full flow.

The 26-year-old finished as United’s top scorer last season with 16 goals in all competitions, in his most productive campaign since his world-record return to Old Trafford three seasons ago.

The midfielder will need to show he can produce his best on a consistent basis to be regarded amongst the league’s leading lights, with his critics remaining as fierce as ever…

Perhaps the easiest inclusion on this list, the Arsenal forward has proven his calibre as an elite talent with a prolific record in the Premier League since arriving from Borussia Dortmund.

Six goals in six games already this season for the Gabon international, who now boasts a record of 38 goals in just 55 league appearances since joining in January 2018.

Winner of the Golden Boot last season alongside Sadio Mane and Mohamed Salah, the 30-year-old is likely to be in contention for the accolade once more in the current campaign.

Named Arsenal’s Player of the Year after a fine campaign last season, the French forward is a fan’s favourite at the Emirates and has established a lethal understanding with striker partner Aubameyang.

Two goals in his first three games of the new season, including a vital strike in the North London derby, seem to point to another successful season for the Lyon star and Arsenal fans will hope the 28-year-old can recover quickly from an ankle injury expected to keep him out until late October.

Restored as Manchester United’s number nine, the flying Frenchman is likely to be handed regular opportunities in his preferred central striking role under Ole Gunnar Solskjaer this season.

Early comparisons to the iconic Henry may seem far-fetched at present, though Martial certainly has the potential to be a star.

The fleet-footed forward possesses pace, technique and ice-cold composure in front of goal, and will be hoping to establish himself as United’s attacking focal point this season after scoring two goals in his first three league appearances of the campaign.

Read Also: The six most prolific starts to a Premier League season