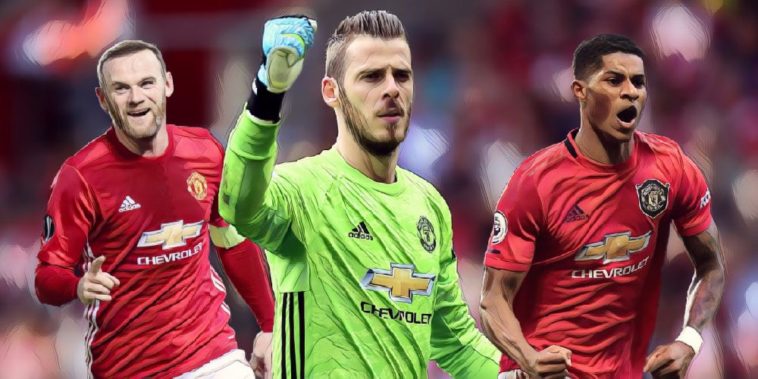 Manchester United’s fortunes have dipped somewhat over the course of the past decade, the club’s dominance of English football for almost the entirety of the previous two seemingly moving further away with each passing year.

That said, the club have still produced several elite players throughout the past ten years, twice being crowned Premier League champions and reaching a Champions League final in the early seasons of the decade.

We’ve decided to compile the club’s best XI from that period, here is the Football Faithful’s Manchester United Team of the Decade…

The easiest position on our team sheet to select, the Spaniard has been an almost constant for the entirety of the decade and the one genuine world-class talent during the club’s recent seasons of struggle.

The Spaniard’s remarkable abilities and consistency have seen him lauded amongst the Premier League’s all-time best shot-stoppers, De Gea named in the PFA Team of the Year on five occasions and as United’s Player of the Year four times.

A winner of each of English football’s domestic honours and the Europa League, De Gea has starred for the majority of his 379 appearances for the club in all competitions.

Signed in the summer of 2009 as part of a recruitment process to replace Cristiano Ronaldo, Valencia would be named in the PFA Team of the Year during his debut season at Old Trafford.

Having arrived as a winger he would be utilised at right-back on occasion, before making the switch permanently and becoming a reliable and consistent performer under a succession of managers.

Part of two title-winning teams, the Ecuadorian’s pace and power enabled him to thrive as a modern attacking full-back, whilst the respect he commanded around the club led to him being named as captain. An injury plagued final season saw him departure last summer.

The centre-back’s glittering Manchester United career would span over the course of the past two decades, though the Serbian made enough of an impact between 2010 and 2014 to warrant inclusion in our side.

A ferociously competitive defender, Vidic would captain the side to two titles, breaking Liverpool’s record for the most top-flight successes in English football and moving Sir Alex Ferguson’s side to a new record of 20.

The first of those two titles during the decade would also come in the same season as a run to the Champions League final, though sadly for Vidic that would end in defeat to Barcelona at Wembley.

He would depart for Inter Milan in 2014, his legacy as an Old Trafford great firmly assured.

Like Vidic, many of Ferdinand’s successes came before the turn of the decade, but a lack of quality successors to the pair in recent seasons earns their inclusion into this side.

Part of both title-winning sides, Ferdinand would be named in the PFA Team of the Year during the second of those victories in what would prove to be Sir Alex Ferguson’s final season in charge.

Quick, powerful and comfortable on the ball, United have struggled to find a commanding presence fit to replace the former England captain in their recent period of transition.

Long before his often strange use of social media, Patrice Evra was regarded amongst the finest left-backs in world football and a firm fan’s favourite amongst the Old Trafford faithful.

The Frenchman was a model of consistency during a nine-year stay at the club, half of which came during the past decade and delivered two league titles, a League Cup and another appearance in the Champions League final.

Evra would leave the club for Juventus in 2014, regarded as one of the club’s best defenders of modern times.

Understated and for a long time underrated, Michael Carrick effortlessly dictated the Manchester United midfield for over a decade, winning every major honour available in club football.

Of those honours, six would come in the past ten years, including two league titles, two League Cups and both FA Cup and Europa League success.

Named in the PFA Team of the Year and as United’s Player’s Player of the Year during the second of those title-winning seasons, Carrick would make over 300 appearances for the club in all competitions over the past decade before his retirement last year and subsequent move into the club’s coaching staff.

The Spaniard would move to the Premier League from Athletic Bilbao in 2014, spending four seasons as a United player and winning four trophies including the FA Cup, League Cup and Europa League.

His tenacity in midfield and passion for the club would instantly endear him to the club’s supporters, and he was named as their Player of the Year following his performances during the 2016/17 season.

Herrera would make 189 appearances for the club and score 20 goals, before departing to join Paris Saint-Germain on a free transfer last summer.

Brilliant when at his very best, frustrating when not quite at it.

Nani enjoyed a mixed spell during a seven-season stay at Old Trafford but his performances in the opening two campaigns of the decade warrant his inclusion in this side.

In particular, his stand-out season as United won a record 19th league title in 2010/11, Nani scoring ten goals in all competitions and being named in the PFA Team of the Year and as the club’s Player of the Season.

He would fire double figures again the following year, before again playing his part as another title was secured in 2013. The skillful Portuguese attacker made 120 appearances for the club this decade before joining Fenerbache in 2015 via a loan spell at Sporting Lisbon.

The academy graduate has been a figure of optimism for Manchester United fans in their recent lean years, bursting onto the scene in style with braces against FC Midtjylland and Arsenal in his first two appearances whilst still a teenager under Louis van Gaal.

Since then Rashford has gone from strength to strength, helping the club to FA Cup, League Cup and Europa League success alongside scoring over 50 goals for the club and becoming an England regular.

Still just 22-years-old, the forward is currently enjoying the best goalscoring form of his career and the sky is seemingly the limit for the Wythenshawe-born player who will hope to spend the next decade in the club’s first-team.

The greatest goalscorer in the club’s history was well cemented as a key figure for club and country at the turn of the decade, though his goalscoring exploits would continue at Old Trafford until his departure in 2017.

In that time Rooney would be named as the PFA Player of the Year and Football Writer’s Footballer of the Year, in addition to winning two league titles, two League Cups, an FA Cup and the Europa League.

Rooney would also help the club to the 2011 Champions League final, scoring in the defeat to Barcelona at Wembley, and would continue to establish himself amongst the club’s all-time greats.

In January 2017 he would score his 250th goal for the club, eclipsing Sir Bobby Charlton’s long-standing record to become the most prolific goalscorer in United’s history.

Sir Alex Ferguson knew he was signing a top talent when he raided rivals Arsenal for their Dutch captain in 2012, though even he was perhaps surprised by Van Persie’s stunning impact in his debut season for the club.

The forward would hit 30 goals in all competitions as United clinched the title in his maiden campaign at Old Trafford, with Van Persie hitting a hat-trick as the Championship was sealed with victory against Aston Villa.

He would continue to fire following Ferguson’s retirement and scored 58 goals in just 105 appearances during his three season stay in Manchester, his legacy secured courtesy of his contribution to that record-extending 20th league title.