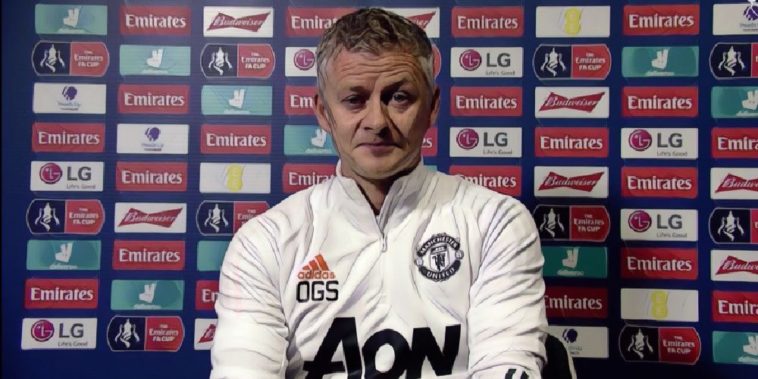 Ole Gunnar Solskjaer has hit back at suggestions that Manchester United are being handed some advantageous refereeing decisions, accusing rival managers of creating a ‘narrative’ against his side as the season draws to a close.

Manchester United have been handed a league-high of 13 penalties in the Premier League this season, with the spot-kick in the recent game against Aston Villa looking particularly contentious, though VAR decided not to overturn Jon Moss’ original decision.

United have also benefitted from a number of decisions against them being reversed, Jordan Ayew’s equaliser being ruled out for the most marginal of offsides while Victor Lindelof should have given away a penalty for a challenge on Wilfried Zaha in the recent 2-0 win over Crystal Palace.

Should Manchester United have been awarded the penalty though?

Speaking ahead of this weekend’s FA Cup semi-final, Frank Lampard said that Manchester United have had a few decisions ‘in their favour’, while Spurs boss Jose Mourinho said his old side have ‘been a bit lucky’, though Ole Gunnar Solskjaer has suggested that the comments are an attempt to ‘influence’ referees.

“I’ve always believed in allowing referees to make the decisions and I am not going to be able to influence them by moaning and crying about it,” the Norweigian said at his pre-match press conference. “There’s no point crying about a decision that goes against you.

“I will 100 per cent defend my players. None of them try to con the referee, at all.

“If you have quick feet like Dan James, (Marcus) Rashford, (Anthony) Martial or (Mason) Greenwood and you get tackled in or around the box, well some ankles could have been broken.

“I just want them to be protected. I trust the referees to do their job. I trust them not to be influenced because I also believe that moaning about them does not do you any favours.

“I think the standard of refereeing is great, a really high level.

? "Everybody knows they were a bit lucky more than one time, luck that others didn't have"

Jose Mourinho thinks that Manchester United have been lucky this season pic.twitter.com/4Txrji3ACD

“We just need to keep playing football let refs do the refereeing.”

“It looks like there is a narrative – and that people want to influence whoever is making the decisions,” he added ahead of Sunday’sgame against Chelsea.

“Talking about luck. We had a penalty against Tottenham in the last minute that was taken away from us. That might have been another two points for us.

“Let’s talk about the red card (Oriol) Romeu should have had when he almost crippled Mason Greenwood against Southampton. Maybe that would have helped us.

“Are we talking about Mark Noble when he should have been sent off when we lost to West Ham?”