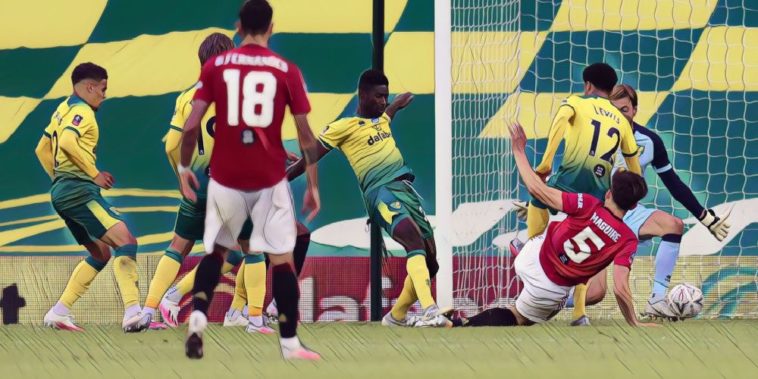 Manchester United laboured into the semi-finals of the FA Cup with a 2-1 win over 10 man Norwich City, Harry Maguire netting a 118th minute winner to send his side to Wembley.

The two sides came into the quarter-final tie in drastically opposing form, United getting notable results against Spurs and Sheffield United since the Premier League restart, while Norwich had been beaten in their two games to leave them staring down the barrel of relegation.

However, despite Ole Gunnar Solskjaer making eight changes from the side that ran out 3-0 winners in midweek, the Red Devils laboured against the Premier League’s bottom side.

It was a game that majorly lacked in attacking quality, though a tidy improvised finish in the 51st minute from loanee Odion Ighalo gave Manchester United the lead, the Nigerian watching the dropping ball to steer past Tim Krul.

Todd Cantwell equalised for the hosts with a fine long-range shot with 15 minutes to go, though Sergio Romero could potentially have done better with the 22-year-old’s effort.

Cantwell’s strike would take the game into extra time, but not before Timm Klose was dismissed for hauling Ighalo down on the edge of the box following a classy flick from Bruno Fernandes.

United dominated in extra time, but struggled to make a breakthrough, and the game looked to be heading towards a penalty shootout until captain Harry Maguire scrambled the ball home with two minutes to play.

His goal would send United to their third FA Cup semi final in six seasons, and the England international admitted his side weren’t at their best.

“It was a difficult game and we made hard work of it. We weren’t at our best, but that’s what happens in cup games sometimes,” Maguire told the BBC.

“We had a tough game in the heat on Wednesday but we made changes so that shouldn’t be the reason. I can’t really put a finger on it at the moment, we’ll have to watch it back and see. We played a little slow and went through the middle a bit too much, we should have done wide a lot more. We’re in the semi-final and that’s all that matters.”

Meanwhile, Ole Gunnar Solskjaer seemed less concerned about his side’s display given the lack of minutes his starting XI have had since the restart.

“It is cup football for you,” the Norwegian said. “The game was not the greatest spectacle but I felt we kept the ball OK but did not threaten or create chances. delighted to be in the last four and got a good workout for many of the players. Nice for Harry Maguire to get the winner.

“Many of these players did not play the last game and now have 90 or 120 minutes in their legs. We have been drawn away every round so have done well to get so far.

“We did make many changes, we still think that the players who play 120 minutes are fit enough for Brighton on Tuesday. I did not make it easy for the players, we had two days to prepare for this game but the rhythm and tempo was not there but we have happy to be through.

“It is great to have the option to rotate. Anthony Martial came on and did brilliant but Odion Ighalo gives me a chance to rotate and he is a proven goalscorer and played his part in both goals. He is a great person to have around the dressing room too.”