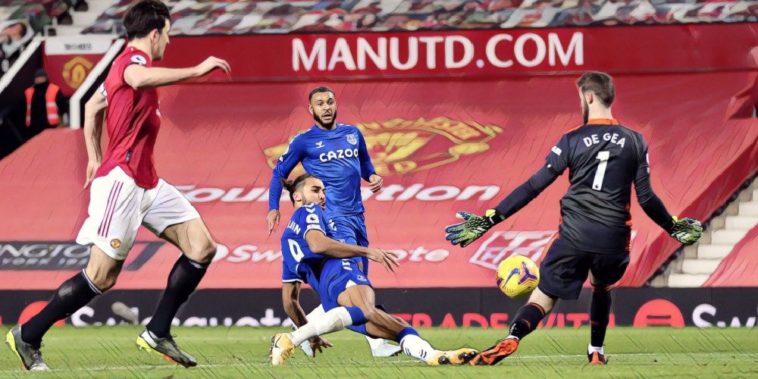 Manchester United twice surrendered the lead as Everton snatched a late point in a hugely entertaining 3-3 draw at Old Trafford.

United had already beaten Everton twice this season, and the third meeting between the two started at a good tempo, with the hosts dominating possession while the visitors had the pacey threat of Dominic Calvert-Lewin and Richarlison up front.

With Everton changing to a midfield diamond, it looked like Manchester United’s best opportunities would come from out wide, and so it would prove as Marcus Rashford flighted a cross in from the right, the ball being met at the back post by veteran striker Edinson Cavani who nodded past Robin Olsen.

The Red Devils looked sharp after going ahead, and they would double their advantage in sensational style as the game ticked into first-half stoppage time. The Toffees afforded the ever influential Bruno Fernandes far too much time and space on the edge of the box, the Portuguese whipping a superb curling and dipping effort over the Swedish ‘keeper Olsen and into the back of the net.

Time after time in the first half, Everton failed to play the ball into their pacey front two, but within four minutes of the restart, the ball was played into Calvert-Lewin who raced in behind Harry Maguire. The English attacker got to the byline before cutting the ball back, with David de Gea only able to produce a weak parry straight into the path of Abdoulaye Doucoure who had the simple task of tapping home.

Three minutes later, and somewhat incredibly, the scores were level, Doucoure picking the ball up at the back post following a Lucas Digne cross, the Frenchman laying it back into the path of James Rodriguez who took a lovely touch before drilling home low past De Gea in fine fashion.

Everton retreated as they aimed to keep it tight at the back and counter-attack, but it was Manchester United who regained the lead with 20 minutes to play, Scott McTominay steering his glanced header beyond the questionable ‘keeping of Olsen following an excellent Luke Shaw free-kick.

United looked like they were on course to move level with Man City at the top of the table, but then, with virtually the last kick of the game, Calvert-Lewin reacted quickest at a free-kick, spinning his man and poking the ball past De Gea, who once again, really should have done better.

Dominic Calvert-Lewin's 95th-minute equaliser for Everton vs. Man Utd was his only shot of the entire game.

Speaking afterwards, Ole Gunnar Solkskjaer was understandably disappointed with the result and the manner of the goals, but insisted he was pleased with his side’s overall performance.

“We played some good football in the second half but conceded three goals from three shots on target. When you do that it is disappointing,” the Norwegian told Sky Sports.

“We reacted well after their two goals but then why was there four minutes added in, we had to get the ball in the corner and see it out. Poor goals to concede.

“I wouldn’t blame anyone on the goals but we know we could have done better as a team on all of them.

“James and Richarlison caused a bit of bother for us before half-time but we did not deserve the 2-0 lead at half-time even though they were excellent goals. We should have seen it off and should have scored a fourth.

“Our front four caused them problems and played well, that is not the problem but it is a 3-3 game with two good attacks. Many more will have enjoyed that game than the Man United supporters.

“Results create the mood, the last kick of the ball makes us go home really disappointed, we have lost two points on a long thump upfield which we should have defended.”

David de Gea has saved just 60.9% of shots on his goal in this season's Premier League, only Rui Patricio (59.7%) has a lower save-percentage of all PL keepers with 15+ apps this season.

He conceded from all three shots he faced tonight. pic.twitter.com/gKkVdGAedH

Solskjaer was also keen to distance his side from the talk of being potential title challengers despite currently sitting second in the Premier League.

“We shouldn’t even be considered as title chasers, we have got better as a team and see where we end up. We need to stop conceding easy goals.”

Next up for Manchester United is an FA Cup fifth round tie against an in-form West Ham side in midweek.