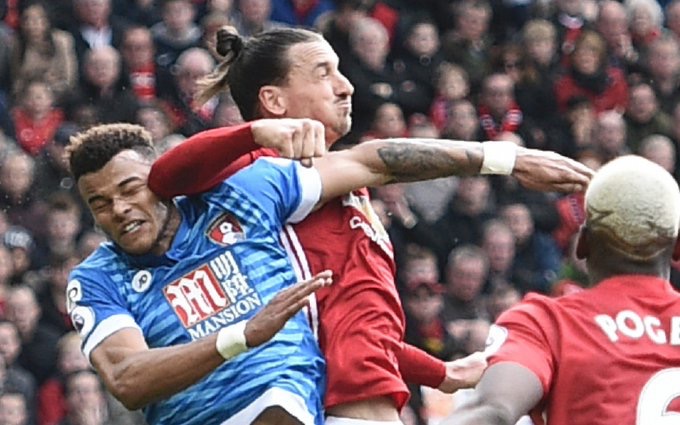 Manchester United once again failed to break down a team from the bottom half of the table at Old Trafford to remain in sixth place, the seemingly permanent home in the table for the Red Devils.

With Bournemouth heading into this game without a win in 2017 and on a poor run of conceding goals, a quick start was needed from United to disrupt Eddie Howe’s team.

The opening tempo was good from United with plenty of chances created by Mourinho’s men. Bournemouth did however pose a threat to United’s defence. The two Cherries strikers seemed to unnerve Phil Jones and Marcos Rojo with the pair looking nervous and playing very clumsily.

For the opening thirty minutes Bournemouth were incredibly disjointed at the back and United looked as if they could carve them open at will.

Mourinho’s team got their breakthrough from the fourth phase from a corner with Antonio Valencia’s drive falling at the feet of Marcos Rojo, who luckily tapped the ball into the back of the net. United had the lead and you expected them to go on and score a few more goals in the game.

The goal appeared to wake Bournemouth up who suddenly had more composure in their play and were able to get into their usual passing rhythm.

It was some neat play from Bournemouth that allowed Marc Pugh dribble his way into the box and send Phil Jones into a frenzy of incredibly bad defending to bring down Pugh and give The Cherries a penalty.

Phil Jones appeared to be back to his usual clumsy self. Former United man Josh King stepped up to take the penalty for Bournemouth and he smashed it into the top corner to make it 1-1, no chance for David De Gea.

After the equaliser things started to heat up on the pitch, particularly between Zlatan Ibrahimovic and Tyrone Mings. The first incident between the two resulted in Ibrahimovic getting a booking just before the penalty.

The next incident saw Tyrone Mings stamp on Ibrahimovic’s head while the Swede was on the floor. An utterly shameful action from the Bournemouth defender who can expect the book to be thrown at him by the FA.

A few minutes later the two were at it again. This time during a corner, Ibrahimovic elbowed Mings in the face. Whether it was intentional or not remains to be seen as Ibrahimovic was jumping for the ball with Mings.

In the melee that followed that incident Bournemouth’s Andrew Surman shoved Ibrahimovic to the ground that lead the referee to give Surman a yellow card which was actually his second yellow card but the referee forgot that fact.

Kevin Friend then went to speak to Ibrahimovic at great length but with no punishment, presumably the conversation was about the elbow incident.

Kevin Friend then remembered he had to send Surman off and indeed showed the red card. For that period the referee totally lost control and looked amateurish.

The second half started with Jose Mourinho having words with Tyrone Mings. As expected Bournemouth parked the double decker bus for the second half but United were panicking so early on and lost their composure and were trying to force the matter so early in the half.

United’s pressure did pay off as a close incident in the box resulted in the award of a penalty for United for handball. Zlatan Ibrahimovic stepped up to take but was thwarted by Artur Boruc who saved the penalty from the Swede.

United couldn’t find a way through for the rest of the game and continued resorting to long balls which really was not the way to go.

Poor game management from Mourinho’s side who played totally the wrong way against ten men which was very disappointing.

A game in which Mings, United and the referee all lost their heads.